New daily cases in Brazil have been increasing again since early November 2020 and may have reached a peak during the week of 10–17 January 2021 with over 412,000 cases.

Ana Fernandez Menjivar, MSc DLSHTM, Senior Epidemiologist at GlobalData, comments: “It is unlikely that new daily cases will decrease significantly in the near future due to the inadequate social distancing measures, slow vaccine distribution and the discovery of a new, more contagious variant.”

According to GlobalData’s Pharma Intelligence Center Pipeline Database and the Coronavirus Disease 2019 (COVID-19) dashboard, Brazil appears to be trending along a moderate to high risk-of-transmission scenario. 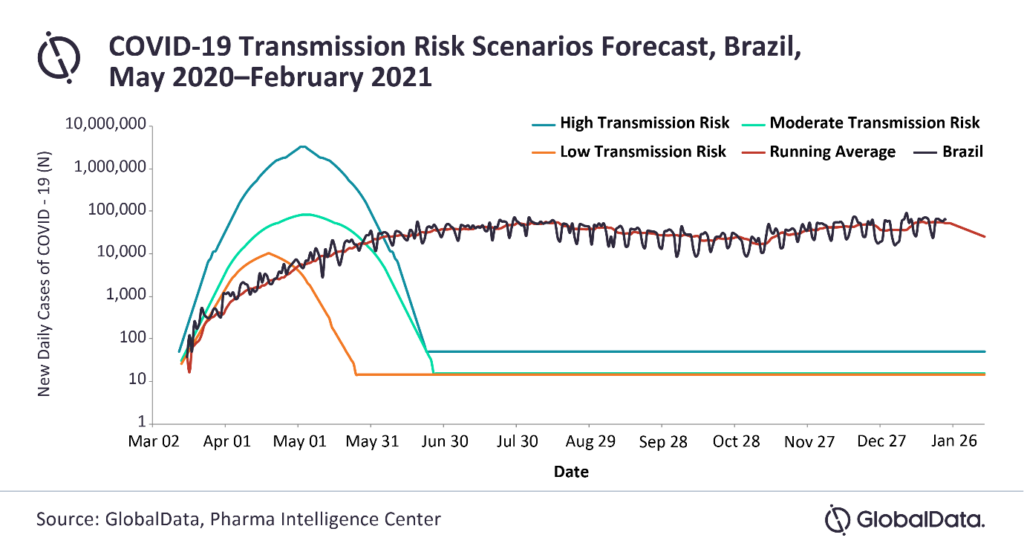 The outlook for the future remains uncertain, as the country’s healthcare system is strained under large numbers of new daily cases, with approximately 49,000 new daily cases and over 900 daily deaths in the last four weeks.

Ms. Menjivar continues: “The easing of lockdown restrictions before the COVID-19 virus was truly contained is one of the reasons for the increase in cases. Government guidelines have been inconsistent, allowing businesses to remain open as case numbers soar and delivering confusing messages about the use of masks. It is also likely that the actual number of undiagnosed cases is much higher than reported, given Brazil’s low testing rate compared with the size of its population.”

In the recent weeks, the state of Amazonas experienced an alarming increase in deaths due to asphyxia because of oxygen shortages at local hospitals that occurred when severe cases were increasing rapidly. This spike in cases and deaths is thought to be the result of a new and more contagious strain of the virus, as well as the large gatherings during the holidays.

Ms. Menjivar concludes: “Brazil is not expected to recover soon, as social distancing measures remain relaxed, vaccine distribution remains slow and indoor venues such as bars and restaurants continue to operate. These conditions create a scenario with high risk of transmission. Although Carnival in Brazil has been postponed, smaller and more localized spikes of new cases due to clandestine celebrations are a possibility.”