Honda Motor Co., Inc (Honda Motor) witnessed an 80% jump in influencer conversations on Twitter during June-November 2020 over the previous six months, according to GlobalData, a leading data and analytics company.

Smitarani Tripathy, Influencer Analyst at GlobalData, comments: “In October, a dramatic conversation spike among influencers around Honda Motor was noticed when the company announced to exit the Formula One World Championship at the end of the 2021 season. The move forms part of the company’s aim to reach its carbon neutral goal by 2050 with focus on developing technologies for fuel cell vehicles and electric vehicles.

“Another major spike for Honda was noticed in June, when the company’s internal server was hit by cyberattack, which brought production, sales and development across its global plants to halt.” 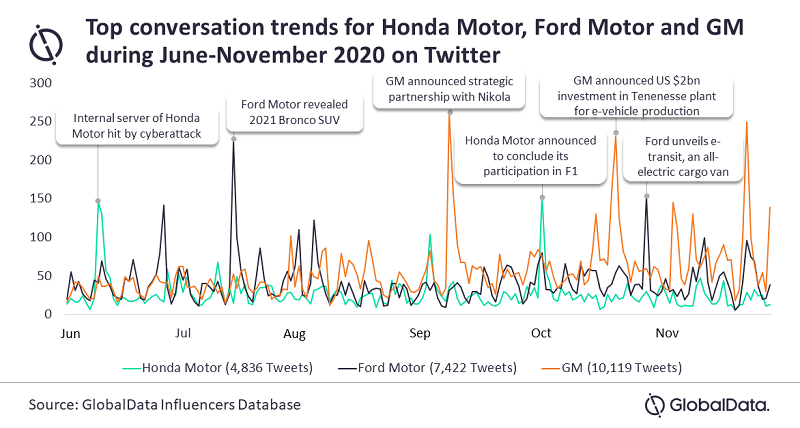 General Motors Company (GM) has emerged as the most mentioned automotive company among influencer discussions on Twitter compared to its peers Ford Motor Company (Ford Motor) and Honda Motor during the period.

An analysis of GlobalData’s influencer platforms revealed that, in terms of percentage growth during June-November 2020 over the previous six months, GM recorded 50% growth in influencer conversations while Ford saw 40% growth only.

A major spike of discussions around GM on influencer platform was noticed in September, when the company agreed to acquire 11% ownership stake in electric vehicle startup Nikola Corporation (Nikola) and build Nikola’s Badger hydrogen fuel cell and electric pickup truck. Another spike was seen in October, when GM announced to invest US$2bn in its Tenenesse plant for electric vehicle production. However, the deal was called off in November.

Likewise, there was a sharp rise in influencer conversations around Ford Motor in October, led by the company’s E-Transit, an all-electric version of delivery van, planned to be launched in November 2020 as  part of the company’s push for electrification.