While the global Human Papilloma Virus (HPV) testing market is predicted to grow at a compound annual growth rate (CAGR( of 2.4% over the next 10 years, the European HPV tests market will exhibit much stronger growth at 8.7%, says GlobalData, a leading data and analytics company. 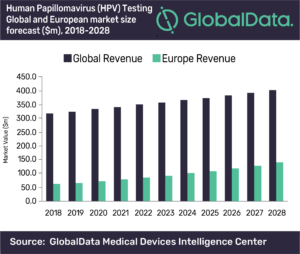 “It is hoped that HPV screening methods may enable better prevention of the disease; these devices are also highly sensitive and allow for increased screening intervals. In the US, HPV tests are already used for widespread screening of asymptomatic women – aged 30 years and older – and this represents the largest market for this medical device.”

Many European countries have also announced upcoming changes in government policies, which are expected to drive strong growth in their HPV tests markets; these include Germany, Italy, UK, Norway, and Sweden.