HSBC’s overall sentiments down on back of tough third quarter, says GlobalData

20 Nov 2019
HSBC’s overall sentiments down on back of tough third quarter, says GlobalData

Weak financial performance and tough market conditions have pulled the overall sentiments for HSBC Holdings Plc (HSBC) down significantly in the third quarter (Q3) of 2019, says GlobalData, a leading data and analytics company.

GlobalData’s Company Filing Analytics platform, which analyzes and showcases sentiments across companies and sectors by scanning through earning transcripts and filing documents, finds 28.3% decline in the overall sentiment score of HSBC for the second consecutive quarter in Q3.

HSBC’s revenue, profits before tax and profits after tax were down by 10.6%, 21.9% and 24.5%, respectively in Q3 2019 as compared to Q2 2019. Under-performance of its continental Europe and US businesses primarily affected the group’s top-line.

Specific charges for some commercial banking clients in Hong Kong and the UK, and high credit charges for unsecured lending in retail banking operations in the US, the UK and Mexico also had adverse effect on the group’s financial performance.

Aurojyoti Bose, Lead Analyst at GlobalData, says: “The UK and Hong Kong remain the two key markets for HSBC and the group’s future performance largely depends on the outcome of Brexit, the US-China trade-war and the ongoing unrest in Hong Kong.” 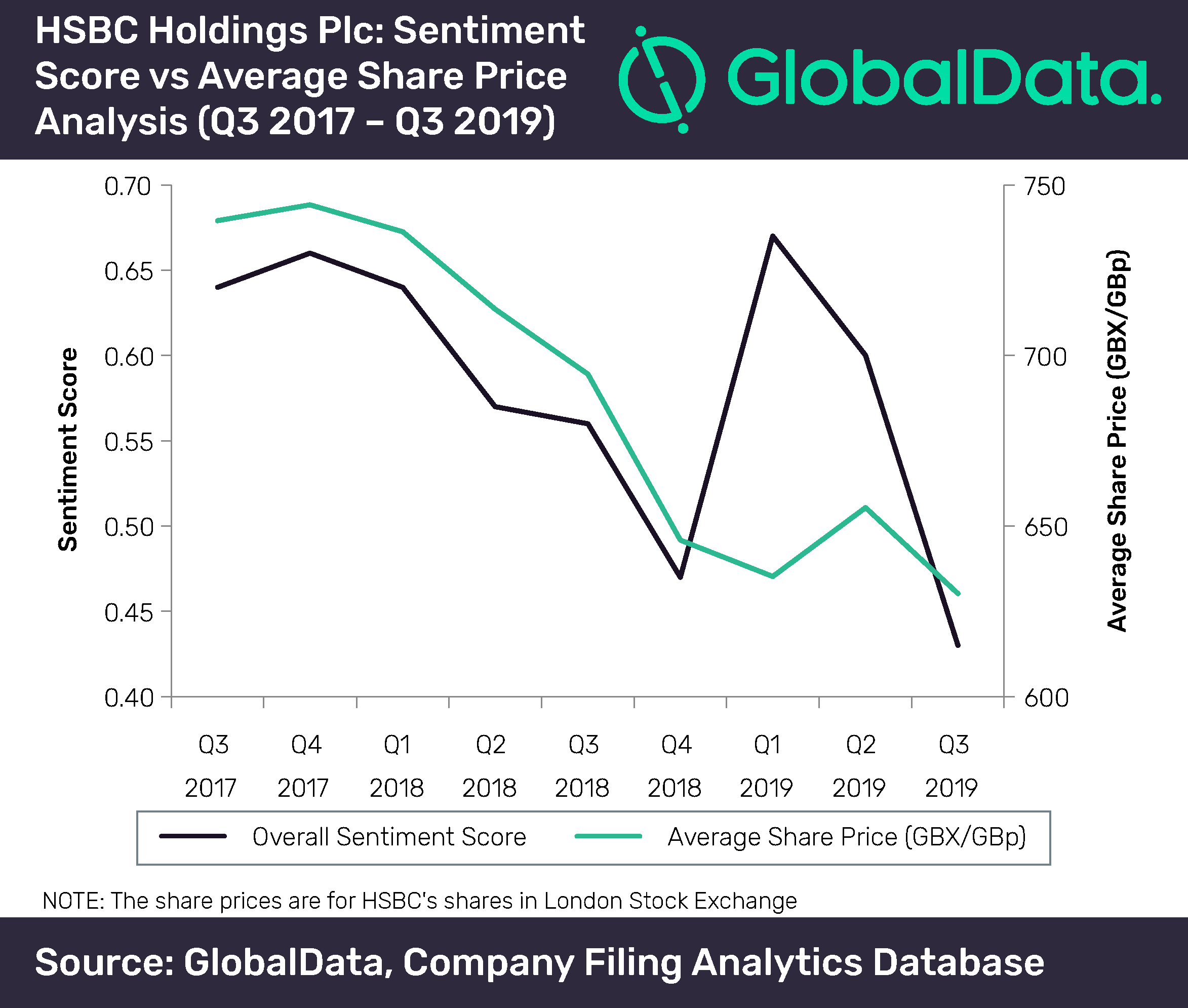 Trending negative media stories around the exit of former group CEO John Flint in August 2019 after just 18 months of assuming the role, along with the announcement of job cuts (as part of cost-cutting efforts) during the same month also made way for unfavorable speculations and affected the overall sentiments for HSBC. This reflects in the rating downgrades for HSBC by several renowned institutions.

Furthermore, following the weak Q3 2019 performance, HSBC expressed inability to achieve its 2020 return on tangible equity (RoTE) of target 11%, which is unlikely to go well with investors.

To meet the operational challenges and improve its business performance, the group has been focusing on cost cutting measures and organizational restructuring. For instance, HSBC brought in a new management team in the US in October 2019 to enhance its focus on the country.

Bose concludes: “It will be interesting to see if changes in approach of new leadership towards organizational restructuring and cost-cutting measures coupled with realigned focus on under-performing geographies and high growth markets are able to make a turnaround for HSBC.”