In the event of a ‘no deal’ Brexit, UK healthcare industry will take years to stabilize, says GlobalData

13 Mar 2019
In the event of a ‘no deal’ Brexit, UK healthcare industry will take years to stabilize, says GlobalData

It may take up to five years for the healthcare industry to stabilize in the event of a ‘no deal’ Brexit. This is the consensus opinion among professionals surveyed in the pharmaceutical industry, according to GlobalData, a leading data and analytics company.

GlobalData’s latest report, ‘Brexit and the Healthcare Industry – Implications for Pharma – The Story So Far’,  revealed that 66% of participants across the US, UK, and EU suggested that it would take more than three years for the UK to stabilize its healthcare industry, compared to only 9% of respondents who indicated that stabilization would occur in less than 12 months.

Gavin Davidson, MSc, Pharma Analyst at GlobalData, commented: “In the event of a ‘no deal’ Brexit, it is not surprising that two thirds of respondents were in consensus regarding how long it will take the UK to stabilize. Approximately 44% of the UK’s exports are traded to EU countries, with a considerable proportion representing healthcare-associated industries. Without a free trade deal being agreed upon prior to departure, the UK would no longer have access to the EU single market.

“In extension, imports will also be significantly affected until new trading agreements are negotiated. These uncertainties have led pharmaceutical companies, such as AstraZeneca (AZ) and GlaxoSmithKline (GSK), and patients on the NHS that are dependent on imported drugs to stockpile medications.”

Participants indicated that ‘three years to less than five years’ would be the most likely timeframe as 39% of the 149 surveyed conveyed this opinion after the events in January 2019, which included the rejection of Theresa May’s Brexit deal during the meaningful vote. Amongst these participants, 64% were vice/senior/executive level presidents, and 57% were associate level employees, indicating some agreement amongst the varied tiers within the pharmaceutical sector. 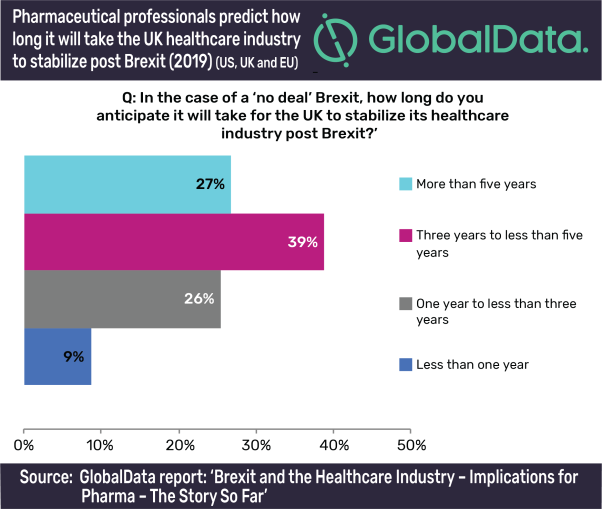 Gavin adds: “It’s exceptionally difficult to forecast just how long it will take for stabilization of the healthcare industry to occur post-Brexit, due to the multiple potential outcomes. After the monumental rejection of Theresa May’s revised Brexit deal on Monday 12th March 2019, members of Parliament will be given the opportunity to decline the notion of a ‘no deal’ Brexit, as well as to vote on the extension of Article 50 of the Lisbon Treaty.

“If this were to occur, the UK would be on track for remaining in the EU during the EU elections, further extending and complicating the detrimental effects towards the healthcare sector, and the economy as a whole. However, May’s response to the voting results indicated different avenues that could be explored if article 50 were extended, including the possibility of a second referendum. Prior to the second ‘meaningful vote’, May’s stance was completely against this notion, emphasising a deal or ‘no deal’ exit out of the EU. Most participants surveyed by GlobalData believed that the most auspicious outcome of Brexit would be to have no Brexit at all.

“As the UK is home to pharmaceutical giants GSK and AZ, along with many other leading international pharmaceutical companies that have very forefront operations in life sciences, it’s of great importance to the UK economy that British-based Pharma operations are able to continue thriving post-Brexit. However, depending on the outcomes over the next few days, the UK may be on a slightly more promising path going ahead.”