India is set to impose 40% basic customs duty (BCD) on solar modules and 25% on solar cells effective 1 April 2022 to reduce the dependence on imports, avert any imminent supply chain disruptions and expand domestic manufacturing base, says GlobalData, a leading data and analytics company.

Mohit Prasad, Project Manager of Power at GlobalData, comments: “The imports of components used in solar industry increased substantially since the launch of the government’s ambitious solar policy-the Jawaharlal Nehru National Solar Mission. The mission earlier had set the target of deploying 20,000MW of grid connected solar power by 2022. Furthermore, the government revised the target of grid connected solar power projects from 20,000MW by 2021-22 to 100,000MW by the year 2021-22 under the National Solar Mission approved in 2015.

According to GlobalData, the country witnessed a sudden spurt in annual solar PV installations in 2015, when 3GW of new solar installations were added to the grid. The subsequent two years saw new highs in the annual installations driven primarily by the solar components’ imports from countries like China and Malaysia at a lower cost.

Mr Prasad continues: “This caused several domestic producers to stop their production, resulting in heavy losses thereby crippling the domestic industry. To safeguard the interest of domestic manufacturers, in 2018, the government introduced the safeguard duty (SGD) on solar cells and modules imported from China and Malaysia.  The implementation of SGD resulted in drop in the annual solar PV installations with respect to an all-time high of 9.5GW in 2017.” 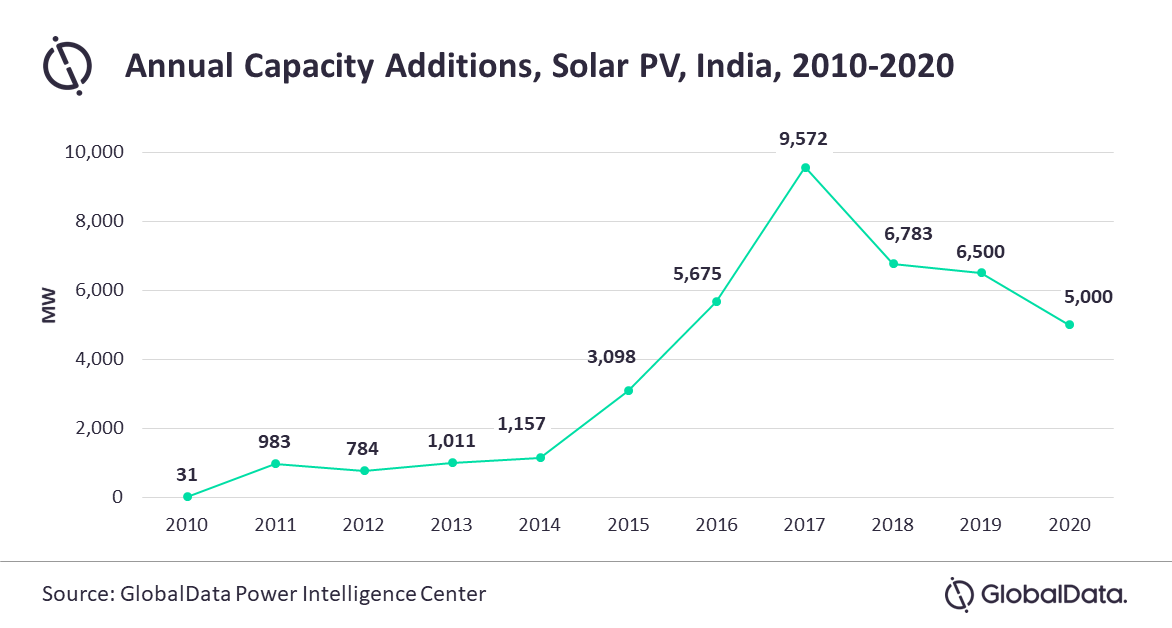 Under the Paris Accord, India has committed to have 40% of its installed electrical capacity from non-fossil fuels by 2030. To achieve this, it has set a target of 175GW of renewable capacity installations by 2022, out of which solar PV is 100GW.

Mr Prasad concludes: “The country wants to achieve the target but at the same time also wants to reduce the reliance on imports to avoid any supply chain disruptions in the future. To bridge the demand-supply gap, a production-based incentive program of INR45bn (US$603m) has been introduced for domestic solar PV manufacturers over the next five years. With the SGD on the imports of solar cells and modules from China going away after July 2021, the domestic manufacturing industry was looking for an alternative option. The implementation of BCD will be a good measure to safeguard the domestic manufacturing industry.”