India presents wealth managers with great opportunity as HNW population set to grow by 40% over next four years, says GlobalData

India presents wealth managers with a great opportunity as the number of high-net-worth (HNW) individuals in the country is expected to grow by around 40% from 200,850 in 2018 to 279,780 in 2022, according to GlobalData, a leading data and analytics company.

GlobalData defines HNW individuals as those with onshore liquid assets of more than US$1m. The number of HNW individuals in India recorded a growth of 52.3% from 2014 to reach 200,850 in 2018.

In fact, the growth of HNW individuals in India outstripped that of other major economies in Asia-Pacific (APAC), such as China and Japan, which registered growth of 38.6% and 1.9%, respectively during the same period.

Siddharth Agarwal, Practice Head of Financial Services at GlobalData, comments: “The growth of HNW individuals in India is forecast to be at a similar rate to the past five years, reflecting the country’s strong and stable economic growth.”

Wealth held by HNW individuals in India increased at a compound annual growth rate of 14.2% from US$452.1bn in 2014 to US$767.9bn in 2018, reflecting the positive performance of asset classes including equities and mutual funds. The value is expected to reach US$1.1 trillion in 2022.

Although HNW individuals account for just 0.02% of the adult population in India, they still hold one third of all liquid assets, a trend that is expected to continue over the next five years. 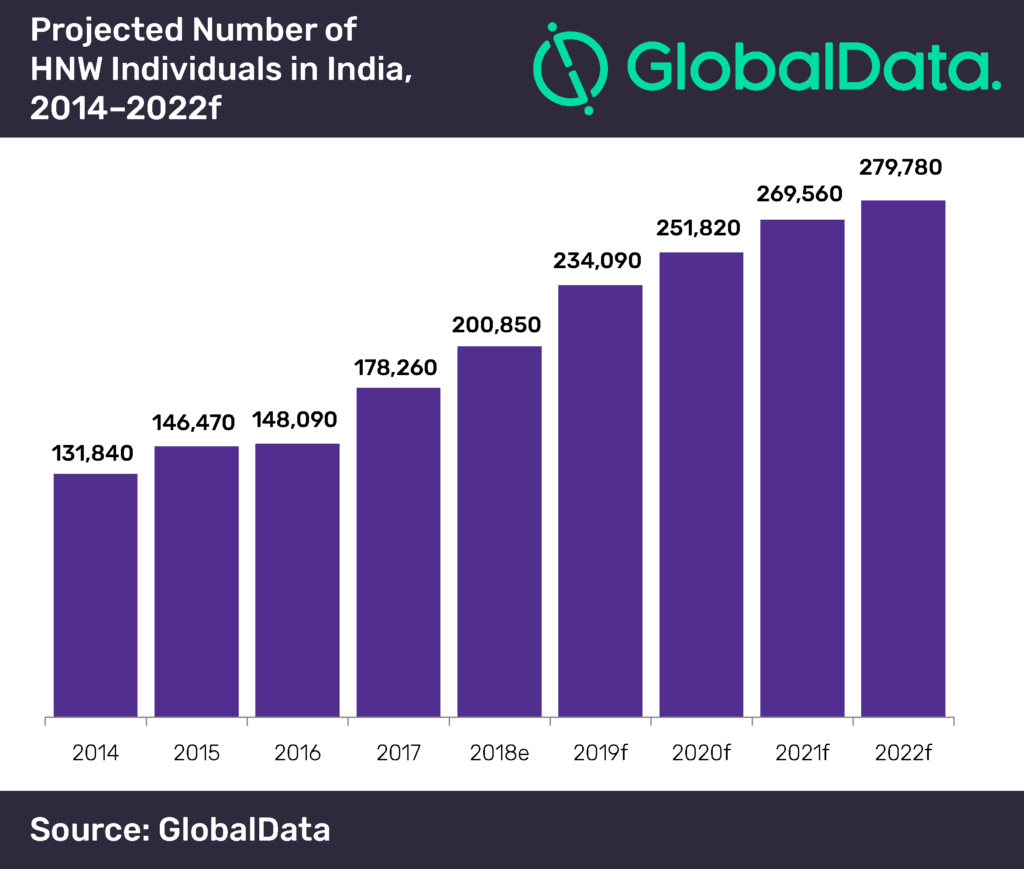 The number of HNW individuals in India has more than doubled in the last decade, but the country still ranks third in APAC, behind China and Japan. Despite its recent trade war with the US, China has witnessed high growth in HNW individuals and retained its top position in the region with over 1.4 million in 2018.

China and Japan are expected to continue to maintain their status as APAC’s powerhouses, accounting for more than two thirds of HNW individuals in the region.

Agarwal concludes: “A strong economic performance, coupled with high growth in equities, will drive the rise of HNW individuals in India over the next four years.

Telco banking offers build on brand identity and rides wave of digitalization, says GlobalData
TSB likely to fall behind competition in race to digitization
N26’s latest results show time is running out for the bank to fix itself
Monzo needs to focus on what is essential to avoid the same fate as Xinja
Morgan Stanley and JP Morgan were top M&A financial advisers by value and volume in global financial services sector for 2020