The global automotive market continues to be in the red due to various factors including declining sales in mature markets, trade war and tariffs, and stringent emission regulations. Against this backdrop, Indonesia looks well-placed to be the pressure release valve that the industry needs, says GlobalData, a leading data and analytics company.

Markets that present long-term opportunity for incremental growth – those beyond the BRICS – have to meet a number of key criteria. Among them are a population over 80 million and good economic growth prospects that will take GDP per capita beyond US$5,000. This number is commonly seen as the inflection point at which new vehicle sales begin to take-off.

GlobalData’s latest automotive report, ‘Emerging Economies – Thematic Research’, which looks at the importance of ‘emerging markets’ as a theme driving the growth of companies in the automotive sector, reveals that Indonesia’s recent record of strong and stable economic growth, and low inflation provide the country with a good foundation for the market to progress from an extremely low base level of sales. 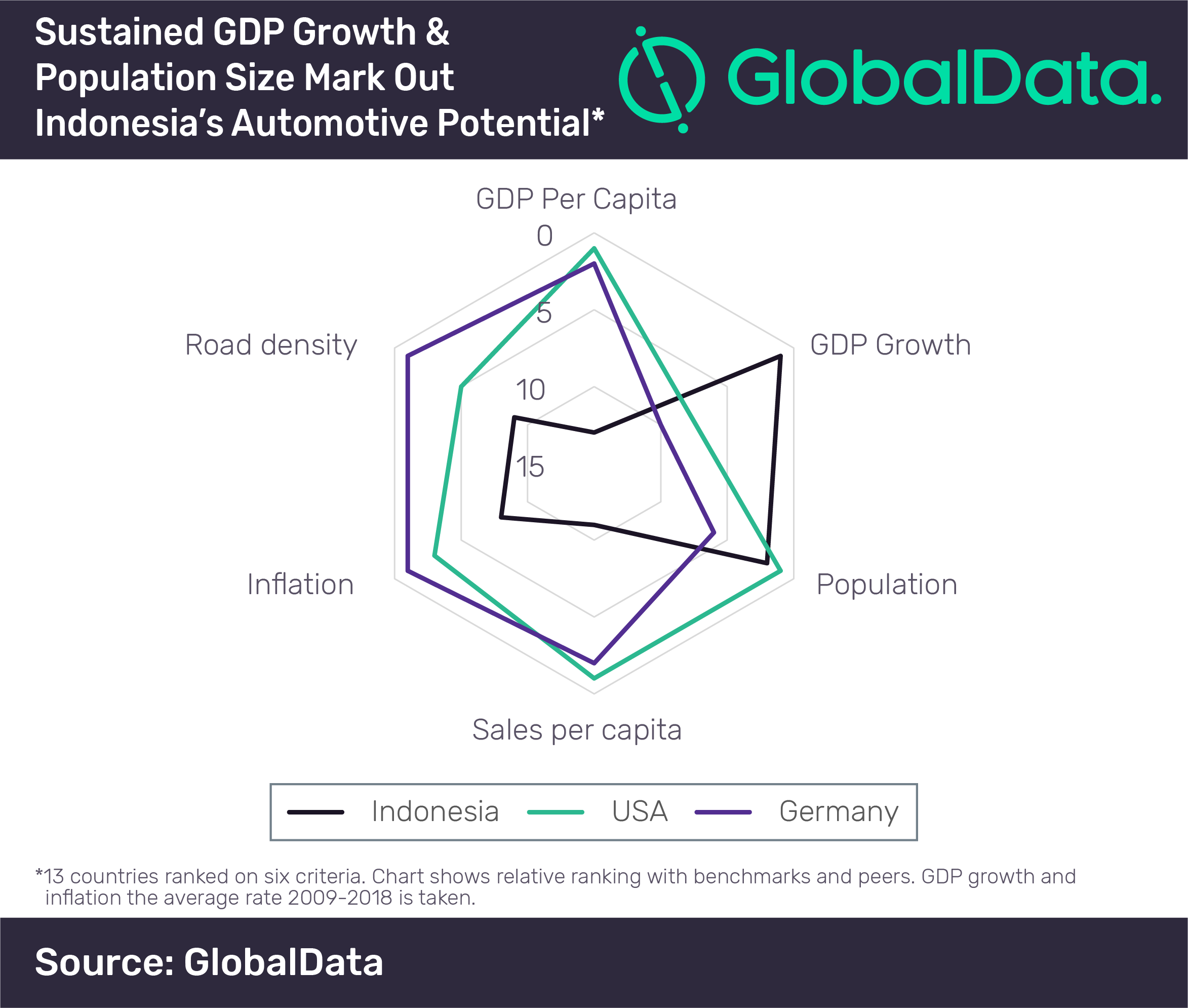 Calum MacRae, Director of Automotive Product Development at GlobalData, comments: “The automotive industry is always looking for the next big volume opportunity to alleviate competitive pressures in the Triad markets (Europe, the US and Japan). Brazil, Russia, India and China (BRIC) have long been identified as that opportunity and still provide much upside.

“However, with China getting closer to market maturity and going through a pause in its growth, Brazil and Russia enduring peaks and troughs and India’s recent progress encountering headwinds, Indonesia, which is the world’s fourth most populous country, is ripe for automotive market development.”

In 2018, sales per capita in Indonesia were just over four per 1,000 of the population, compared with just over 11 per 1,000 in Thailand. The sheer size of the population still delivered a market of over one million in 2018 and looks on target to maintain that level in 2019.

However, for those companies looking to make the most of this long-term opportunity MacRae warns: “As with many of the high-potential markets in the Asia region Toyota is already very entrenched there. Together with its stable mate Daihatsu, the company accounted for nearly 60% of light vehicle production in Indonesia in 2018. However, that did not deter new entrants. SAIC, through Wuling, has big plans so does Hyundai with a new 200,000 capacity plant. But history shows us, with Maruti in India being a prime example, that an entrenched incumbent original equipment manufacturer makes for a very solid competitor.”