California-based cryptocurrency exchange platform Coinbase Global, Inc. (Coinbase) made its Nasdaq debut on 14 April 2021. Against this backdrop, the company witnessed a 500% jump in influencer conversations on Twitter during the third week of April 2021 over the previous week, according to GlobalData, a leading data and analytics company. 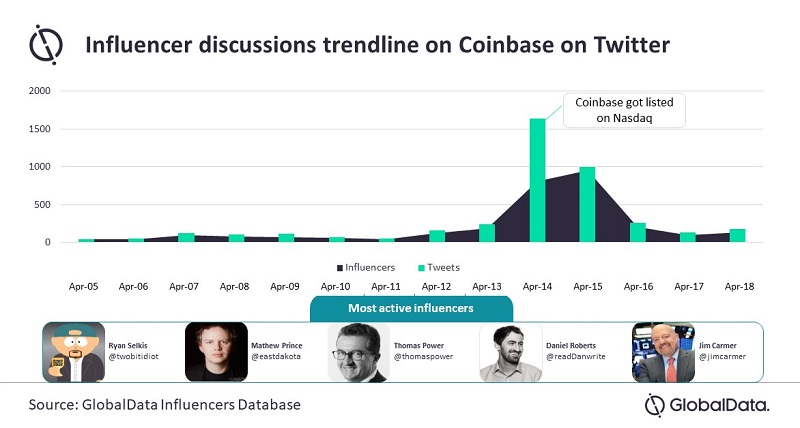 Coinbase’s share price soared above US$380, when compared to its reference price of US$250. The company’s valuation surged above US$100bn, significantly higher than the Intercontinental Exchange and Nasdaq.

Smitarani Tripathy, Influencer Analyst at GlobalData, comments: “The influencers see the company’s move for public listing as a driver for cryptocurrency market validation and capitalize on crypto bull run. The influencers’ sentiment was largely positive on the company’s move for public listing, which according to them, may work as a barometer for growing adoption of cryptocurrencies including Bitcoin, Ethereum, Litecoin and Bitcoin Cash.”

“Congratulations to @brian_armstrong and the @Coinbase team on going public today! Terrific to have you as a @Cloudflare customer. @fredwilson shared that the initial pitch to @usv was in a conference room in our offices years ago. Proud to have been a small part of the journey.”

“I think @coinbase is the real deal…however, this stock could be insanely volatile, says @jimcramer. You got to be real disciplined about buying it at the right levels.”

“I remember when Coinbase raised $1 billion and everyone thought it was crazy, and here we are at 100x,” says @dickc on @CNBCTechCheck. Players like these “are going to grow and grow because their total addressable market is everything.”

“#Coinbase is set to become the first major crypto business to go public in the U.S. and, should it reach a $100 billion market cap, will instantly be one of the country’s 85 most valuable companies.”

“The power of decentralized finance (#DeFi), which has a 100% open book accounting system is just now being felt. The #IPO of @Coinbase will help mainstream #blockchain based #cryptocurrency.”