Infrastructure as a service revenue in Asia-Pacific to grow at 11.2% during 2019-2024, forecasts GlobalData

The Asia-Pacific (APAC) region continues to be a vibrant market for infrastructure as a service (IaaS) space, owing to the growing demand for the cloud infrastructure services among enterprises. As a result, the overall IaaS revenue in the APAC region is estimated to grow at a compound annual growth rate (CAGR) of 11.2% during 2019-2024 to reach US$39.3bn in 2024, forecasts GlobalData, a leading data and analytics company.

Anshuma Singh, Technology Analyst at GlobalData, comments: “Increased government spending to modernize the existing IT infrastructure and growing shift towards server virtualization are the major factors likely to boost the growth of the IaaS market in the region.”

According to GlobalData’s Market Opportunity Forecasts Model, IaaS will be the fastest-growing segment during the forecast period. It accounted for approximately 21% of the total cloud computing revenue in 2019 in the region. China, Japan, India, Australia and South Korea will be the five largest IaaS markets within the APAC region, together accounting for more than 80% of the overall market share by 2024. 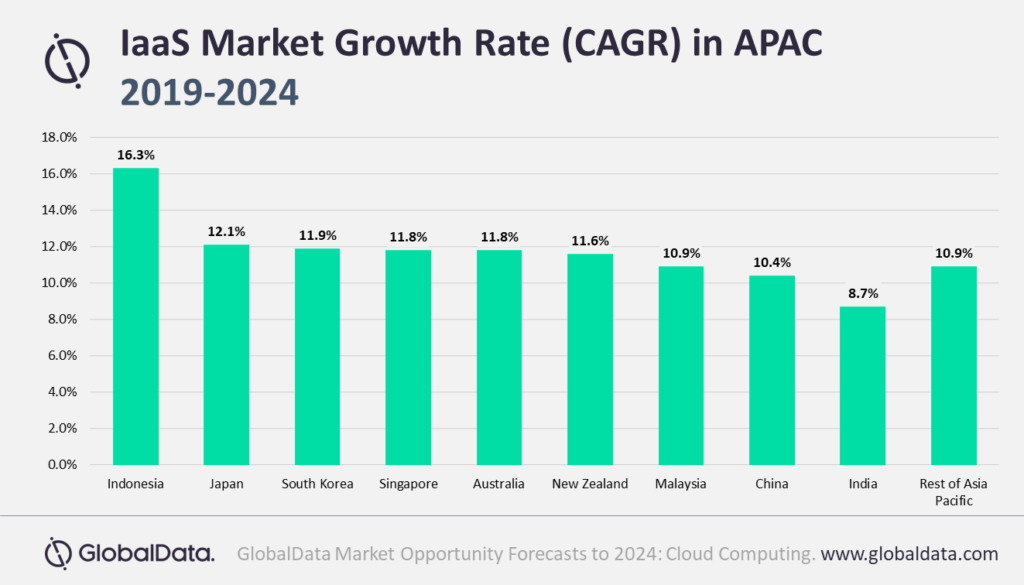 Government initiatives are expected to propel the development of the cloud services market in the region either directly or indirectly in line with other digitalization initiatives such as ‘Digital India’ campaign in India and ‘Cloud-First Strategy’ by Malaysia.

IaaS vendors are also focusing on strategic partnerships with the local and global telecom service providers to expand their presence in the region. For instance, Amazon introduced AWS Wavelength for telecom operators.

Ms Singh concludes: “Maintaining and owning a data center is expensive and complicated. Against this backdrop, IaaS has emerged as a universal technology in the cloud environment. This will encourage businesses to implement cloud infrastructure services within their premise to reduce operating costs and enhance productivity.”