The company’s report, ‘Global Planned Oil and Gas Pipelines Industry Outlook to 2023 – Capacity and Capital Expenditure Outlook with Details of All Planned Pipelines’, reveals that Iran is expected to have new-build pipeline length of 7,496 km by 2023.

Adithya Rekha, Oil and Gas Analyst at GlobalData, comments: “A total 18 new-build pipelines are expected to start operations in Iran by 2023. Iranian Gas Trunk line–IGAT IX is the longest upcoming pipeline in the country with a length of 1,863km. It is a natural gas pipeline that is expected to start operations in 2022. National Iranian Gas Co owns a 100% equity stake in the pipeline and will also be its operator.” 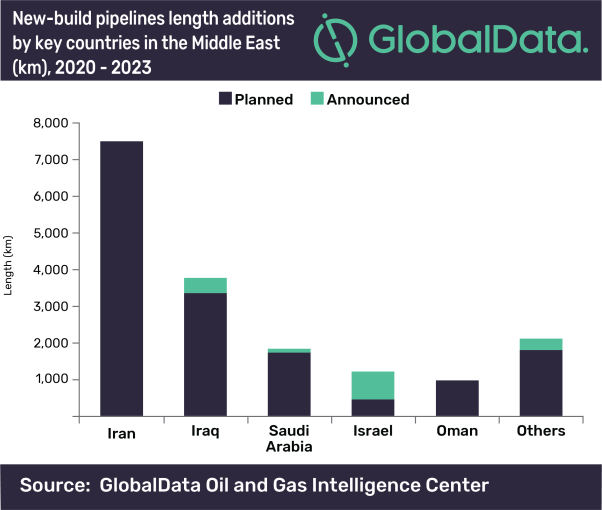 GlobalData expects Iraq to be the second-highest contributor to the region’s new-build pipeline length additions by 2023 with a length of 3,775km. Planned projects are expected to contribute around 3,375km, while the remaining 400km will be from early-stage announced projects. Basra–Aqaba Gas is the longest upcoming pipeline in the country with a length of 1,700km. It is an onshore natural gas pipeline that is planned to start operations in 2023.

Following Iraq, Saudi Arabia ranks third in contribution to the new-build pipeline length additions in the region by 2023 with a length of 1,824.8km from nine upcoming pipelines. Of the total length, planned pipelines will contribute 1,724.8 km while announced pipelines contribute 100 km by 2023. Haradh–Hawiyah Gas is the longest upcoming pipeline in the country with a length of 450 km. It is an onshore natural gas pipeline planned to start operations in 2021.