Ireland is experiencing a slowdown in growth for international arrivals from 2018 to 2022, says GlobalData

13 May 2019
Ireland is experiencing a slowdown in growth for international arrivals from 2018 to 2022, says GlobalData

Growth rates for Ireland and international arrivals have decreased significantly with the Compound Annual Growth Rates (CAGR) nearly half the rate for the previous years from 8.1% in 2014 to 2018, to 3.8% for 2018 to 2023, according to GlobalData, a leading data and analytics company.

The company’s latest report ‘Tourism Destination Market Insights: UK & Ireland – Analysis of destination markets, infrastructure and attractions, and risks and opportunities’, includes an analysis of source markets, infrastructure and attractions, and assesses the risks and opportunities for the UK & Ireland as destination markets. 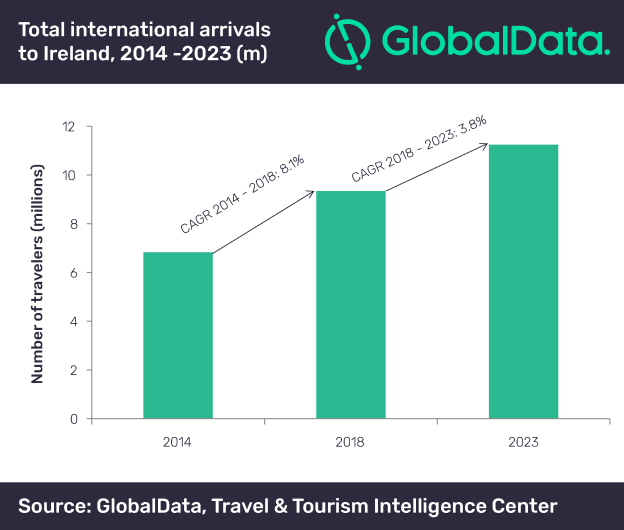 Johanna Bonhill-Smith, Associate Analyst for Travel & Tourism at GlobalData comments, “Ireland received around 9.3million international arrivals in 2018 and an increase of 3.9% is forecast for 2019; urging around 9.7million international travelers to Ireland. Despite this growth, 2017 to 2018 held a yearly difference of 7%, nearly double the amount for the increase this year.”

The UK holds the top position for international arrivals presently, due to accessibility, affordability and convenience in travel to Ireland. However, due to ongoing negotiations, complete uncertainty and potential outcomes of Brexit’, traveler flows have also slowly dwindled according to GlobalData, decreasing 4% from 6.8% in 2017 to 2018, to 1.7% from 2018 to 2019.

European source markets dominate the Irish international arrivals lists for 2018 with countries such as Germany, France, Italy and Spain taking the lead.

Potential European travelers could be hindered in the process of choosing Ireland as their next tourism destination, due to insecurities and feeling unwelcome due to the current political circumstances regarding Brexit. Furthermore, in order to tackle any doubt, governments, DMO’s and local authorities should be working collaboratively on campaigns to further encourage European travelers to Ireland. After all, European destinations accounted for 76% of total international arrivals to Ireland in 2018, thus actions should be taken.

Further promotion campaigns such as ‘Emerald Island – Passport to the World’ in 2019, a travel documentary showcasing Ireland across Canada, has driven Canadian travelers to Ireland. Canada holds the most potential for growth out of all North American source markets.

Bonhill-Smith adds, “Despite overall slowdown with international arrivals, Canada forecasts as a promising source market for Ireland. Due to cultural similarities, the emergence of new flight routes followed by an increase in promotional campaigns to this North American destination, Canadian travelers are expected to grow by 7% from 2018 to 2019, further highlighting opportunities for growth within Ireland’s source markets.”