Japan cities to be deprived of economic gains from Tokyo Olympics amid COVID-19 resurgence, says GlobalData

The resurgence of COVID-19 cases across Japan in winter season and the delay in mass inoculation process are likely to reduce the gains expected for the local economies during Tokyo Olympics, thereby delay the economic recovery of Japanese cities in 2021, according to GlobalData, a leading data and analytics company.

To contain the spread, the government declared state of emergency since 7 January 2021 in Tokyo, Kanagawa, Saitama and Chiba and further expanded to seven more prefectures. Although, the move resulted in a quick reduction in the number of daily new cases, the medical system has been overburdened with rising cases of hospitalization. The restriction was further extended till 7 March across 10 prefectures, including Tokyo.

On the other hand, mass inoculation process in Japan is delayed and the country is lagging far behind its peers such as the US, the UK, China and Russia in terms of vaccine development and insists on domestic clinical trials on procured vaccines.

Against this backdrop, GlobalData has revised downwards the growth forecast of Japanese cities on 15 January 2021 compared with 9 December 2020 underscoring the impact from the resurgence of COVID-19 cases.  Substantial decrease in demand in face-to-face services industries including tourism and hospitality sector is likely to exert strong downward pressure on the growth.

Tokyo, the main venue of Olympics games, was set to attract a total of 25 million tourists in 2020 as part of initial tourist target by Tokyo Municipal government. To boost the tourism sector, the government launched ‘Go to Travel’ campaign since July 2020 to stimulate domestic tourism. As of December 2020, Japan pledged to boost the tourism sector with inbound tourism during Olympic Games.

Anuradha Amarendra Joshi, Economic Research Analyst at GlobalData, comments: “Tokyo Olympics and Paralympics 2020 are postponed to July 2021. The resurgence of cases made the government to suspend the domestic tourism promotional scheme and rethink over the plan to welcome foreign tourists while assessing the risk.” 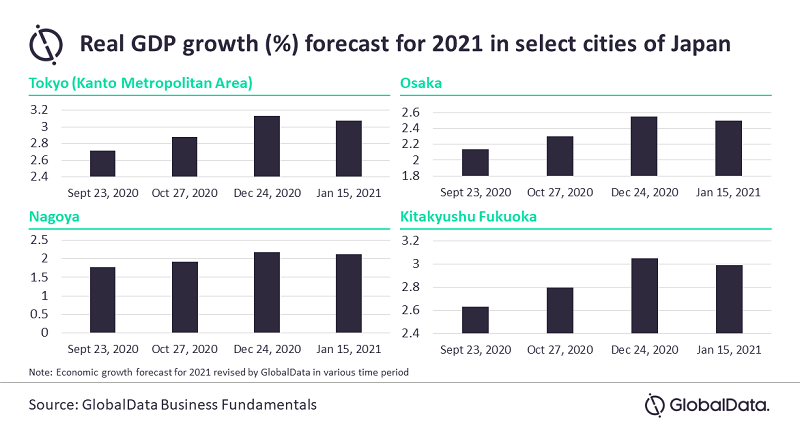 The Olympic Committee along with the Japanese Government and Tokyo Municipal Government is committed to host the games amid the rising public concerns.