GlobalData’s report, ‘Japan Savory snacks – Market Assessment and Forecasts to 2024’, reveals that the sector is majorly driven by the potato chips category, which is forecast to register the fastest value CAGR of 0.1% during 2019–2024. The category is followed by ethnic/traditional snacks and processed snacks, which is expected to record negative CAGRs of 0.17% and 0.18% respectively, during the next five years.

Sanchi Agarwal, Consumer Analyst at GlobalData, says: “The savory snacks sector in Japan is being driven by continuous innovation in terms of flavors and formulations to appeal to the young experimental consumers, who lead busy lives and try to fit more activities in their increasingly time scarce lives. However, a rapidly ageing population in Japan poses a challenge to the sector growth as older consumers often look for healthy and ‘better-for-you’ food options as against processed foods.”

“Hypermarkets & supermarkets’ was the leading distribution channel in the Japanese savory snacks sector in 2019. It was followed by convenience stores and department stores. 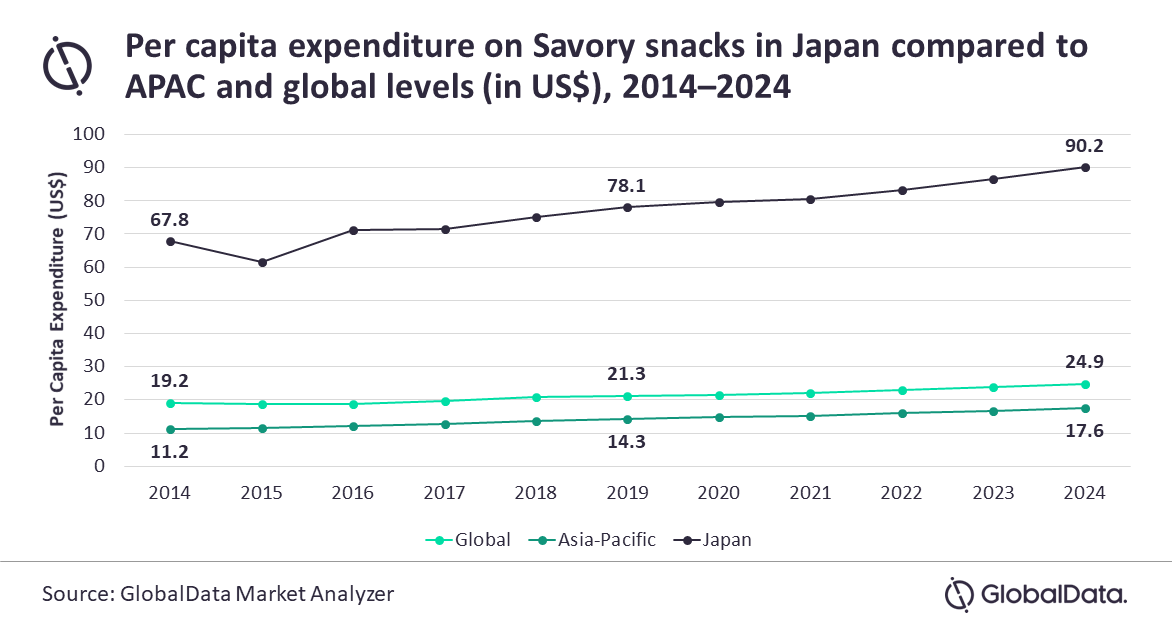 Ms Agarwal concludes: “Currently, the proportion of over-65-years-olds in Japan is approximately one-fifth of the total population and is rapidly growing. Older consumers demand foods with health benefits, which snacks are rarely associated with. Moreover, snacking throughout the day has not been common in the past, which makes older consumers even less likely to purchase savory snacks. Thus, fortification or the use of healthier ingredients will be key for the savory snacks manufacturers when targeting this large and wealthy consumers’ groups.”