The bank led the competition by deal value, with five deals worth a combined $21.5bn, including the industry’s highest value deal – Walmart’s proposed acquisition of a 77% Stake in Flipkart for $16bn.

According to GlobalData, which uses its tracking of all merger and acquisition, private equity/venture capital and asset transaction activity around the world to compile the league table, Barclays and Goldman Sachs were the remaining two advisers among the top three with $20.4bn and $18.8bn, respectively.

Prakhar Baghmar, Financial Deals Analyst at GlobalData, said: “Involvement in big-ticket deals has proved to be the game changer in the retail industry, as all four advisers involved in the Walmart-Flipkart deal made it into the top half of the table, while Rothschild came seventh, despite working on 12 transactions.” 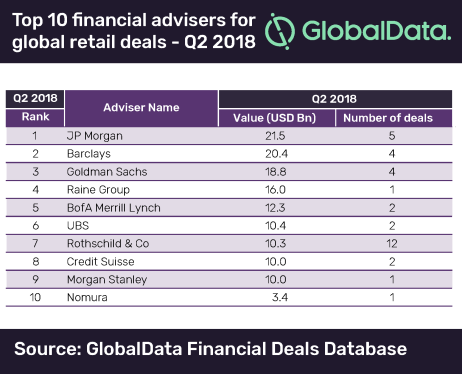 US-based Gibson, Dunn & Crutcher topped the list of the top 11 legal advisers by value and shared the position with Hogal Lovells by volume. Gibson, Dunn & Crutcher advised on three deals worth $26bn. All the top ranked advisers in the league table were associated with the Walmart-Flipkart deal during the quarter. The last five advisers of the table shared the seventh rank as they only advised on this deal. 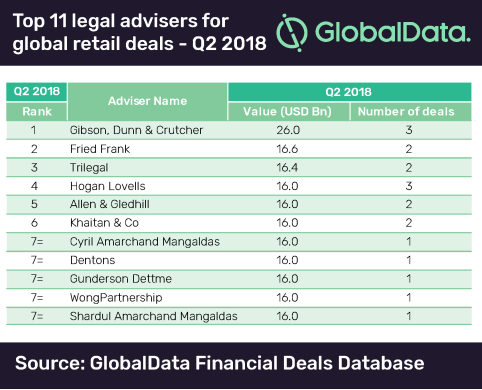