In Japan, the treatment landscape for inflammatory bowel disease (IBD), comprising Crohn’s disease (CD) and ulcerative colitis (UC), is mature and encompassing many conventional therapies as well as novel therapies including biologics and a small molecule. With the increasing competition from biosimilars and the late-stage pipeline drugs, key players with novel therapies are offering comprehensive digital support to patients through combined use of branded and unbranded channels, says GlobalData, a leading data and analytics company.

In Japan, patients with CD and UC are initially treated with aminosalicylates, corticosteroids, and immunosuppressants, followed by biologics. Leading marketed therapies for UC include Janssen/ Mitsubishi’s Remicade, Simponi, and Stelara, AbbVie’s Humira, Takeda’s Entyvio, and Pfizer’s Xeljanz while for CD include Janssen/ Mitsubishi’s Remicade and Stelara, AbbVie’s Humira, and Takeda’s Entyvio.

Venkat Kartheek Vale, Pharma Analyst at GlobalData, comments: “IBD causes an enormous physical and emotional burden on the wellbeing of patients and impacts daily life activities. The combined approach of digital support through branded websites for the treatment support and unbranded websites for disease management is used to spread the awareness of the benefits associated with innovative therapies and prevent switching to alternative treatments.” 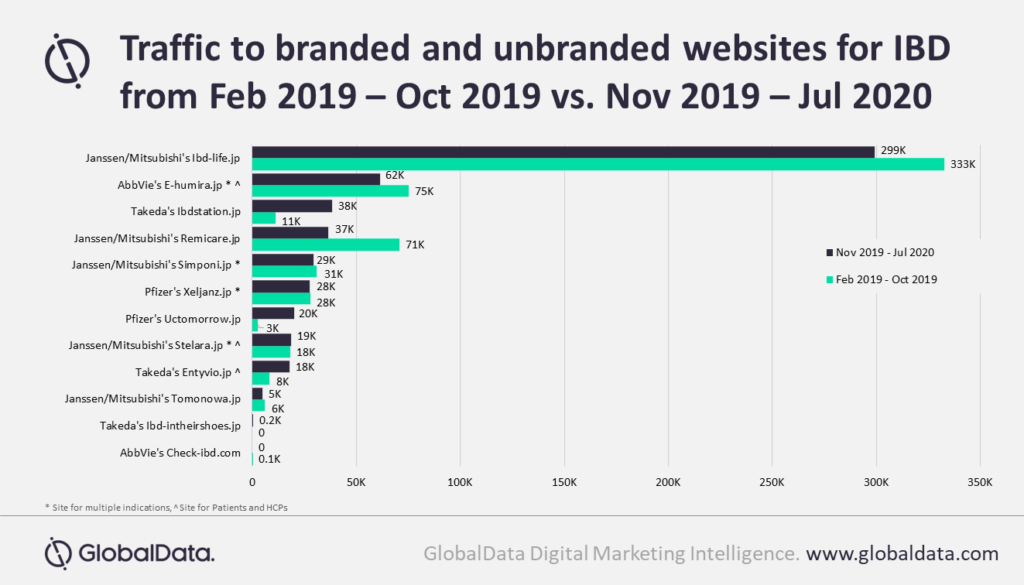 An analysis of the traffic for the last 18 months (February 2019 – October 2019 vs. November 2019 – July 2020) revealed the highest traffic to Janssen/Mitsubishi’s unbranded website Ibd-life.jp, driven by search engine optimization tactics that employs a high number of organic and paid keywords, while among the branded websites, AbbVie’s E-humira.jp, Janssen/Mitsubishi’s Remicare.jp and Simponi.jp, and Pfizer’s Xeljanz.jp received consistent good traffic.

Mr Vale concludes: “Growth in the IBD market is driven by increasing prevalence of CD and UC, but stiff competition from biosimilars is hampering the growth of the existing brands. As a result, major players are focusing more on patient engagement through digital channels, with the Janssen/Mitsubishi’s unbranded website and IBD-specific branded website being the most successful as evidenced by the maximum traffic flow. Furthermore, the presence of remaining players, such as AbbVie, Takeda and Pfizer, in both branded and unbranded channels emphasizes the need for continuous patient engagement in this area resulting in a well-established digital landscape.”