Kuwait Petroleum Corp is expected to account for 8% capacity share in the global liquefied natural gas (LNG) regasification industry from new-build (planned and announced) projects between 2019 and 2023, according to GlobalData, a leading data and analytics company.

Adithya Rekha, Oil and Gas Analyst at GlobalData, explains: “The entire regasification capacity additions of Kuwait Petroleum Corp comes from the proposed Al-Zour LNG regasification terminal in Kuwait. This planned offshore terminal is expected to start operations in 2020 with a capacity of 1.2 tcf.” 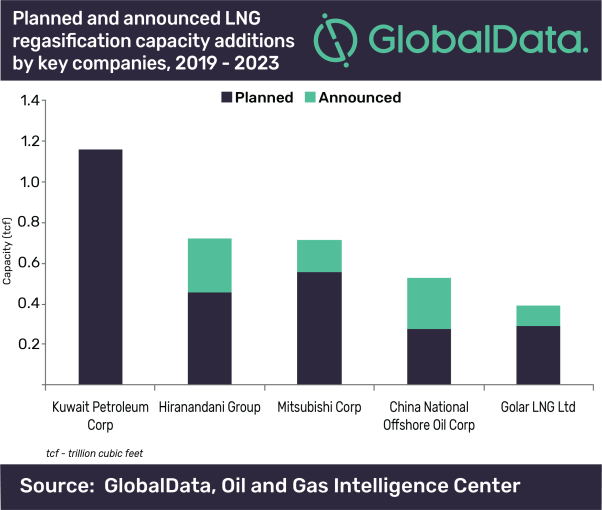 After Kuwait Petroleum, Hiranandani Group is the second highest company globally in terms of regasification capacity additions by 2023. The company is expected to add 717 billion cubic feet (bcf) of regasification capacity through five terminals by 2023. Of this total capacity, 449 bcf is expected to come from three planned projects while 268 bcf comes from two early-stage announced projects.

Total SA leads global long-term LNG contracted capacity signed by key purchasing companies in 2020
Around three quarters of North American midstream projects that got impacted are in the US
US to drive LNG liquefaction capacity growth in North America by 2024
South America’s offshore production to surpass North America’s by 2024, says GlobalData
Reduced LNG demand due to economic slowdown has led to delays in FIDs