Russia is investing billions of dollars in new naval hardware to secure its lengthy coastline and strengthen power projection capabilities. However, Russia’s defense expenditures have declined in real terms from US$52.6bn in 2015 to US$46.4bn in 2019 and will only recover its historic highs in 2024 with US$59.3bn, according to GlobalData, a leading data and analytics company.

GlobalData’s latest report: ‘Russian Defense Market – Attractiveness, Competitive Landscape and Forecast to 2024’ states that Moscow has already had to revise its ambitions under the financial constraints of an economic slowdown and the drop of the ruble’s value, consequences of the Ukrainian conflict and the subsequent diplomatic backlash from western countries.

As most Russian naval construction programs are currently running behind schedule, the Ministry of Defense (MoD) is set to postpone its most ambitious projects and focus on lighter platforms. The Lider class destroyer and the Shtorm class aircraft carrier projects, both initially envisioned to be under construction by the early 2020s, have been excluded from the State Armament Program (SAP) 2018–2027. On the other hand, naval platforms acquisition remains the most significant area of investment, and is deemed to grow between 2019 and 2024. 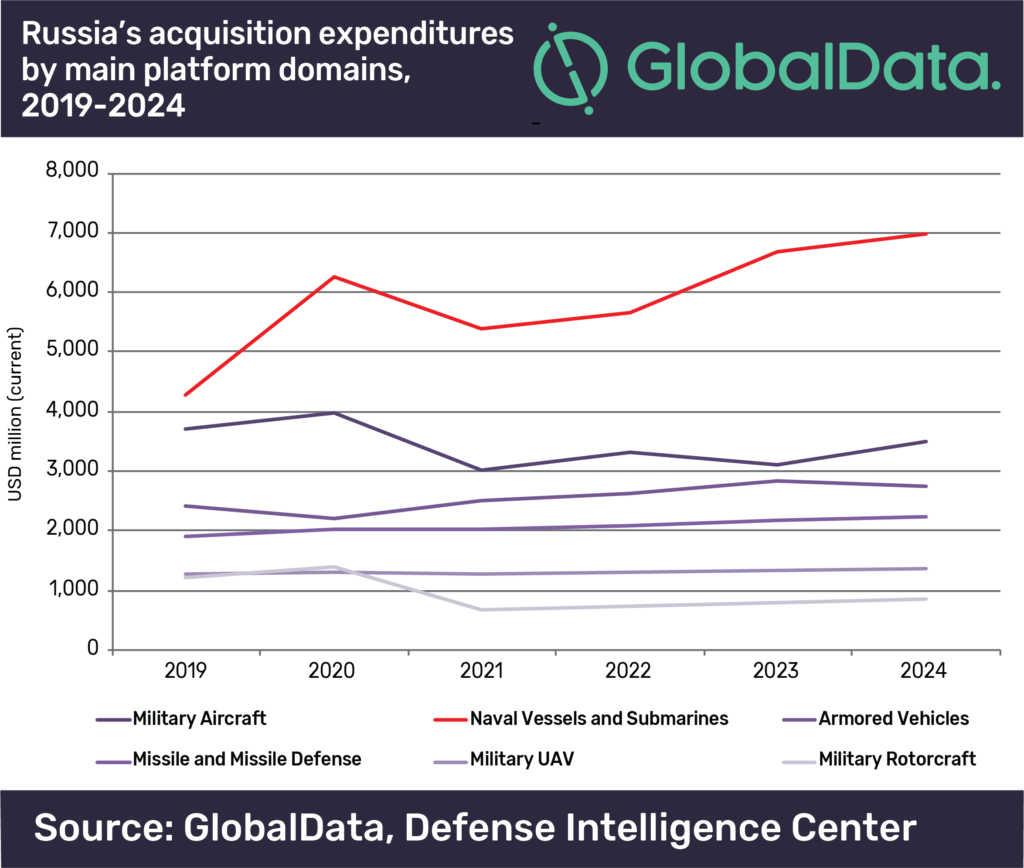 Nicolas Jouan, Defense Analyst at GlobalData, comments: “Russia’s only active aircraft carrier, the Admiral Kuznetsov, is currently in repair and rumored to be scraped altogether since the dry-dock PD 50 sank under it during maintenance operation in October 2018. In contrast, production of the new Gorshkov class and Grigorovich class frigates are well under way.

“Interestingly, the most sustained area of investment in Russia’s budget forecast for 2019 to 2024 will be corvettes with the continuation of the Buyan class and Steregushchiy class programs. Corvettes are a cost-efficient way to upgrade its navy for Russia, as Moscow claims that these light ships are able to carry the latest version of the Kalibr-M cruise missile. They also have more potential on the export market, as the pool of potential clients is larger than for bigger platforms.”

Budget constraints are also redefining priorities in terms of weapon systems development. The Russian MoD is expected to pour more resources in the development of the hypersonic Zircon cruise missile so that new surface vessels and submarines can field it over the coming years.

Jouan concludes: “Russia’s military modernization plan has taken a more modest outlook since the beginning of the country’s economic slowdown, but small platforms and missile systems will directly benefit from reoriented priorities.”