The systemic lupus erythematosus (SLE) pipeline is characterized by a high level of first-in-class innovation when compared to other therapy areas and the industry as a whole, says GlobalData, a leading data and analytics company.

Mark Needham, Pharma Analyst at GlobalData, says: “We have assessed all first-in-class molecular targets in the SLE pipeline and ranked them based on the commercial potential. We found non receptor tyrosine protein kinase, also known as tyrosine kinase 2 (TYK2) to have the highest potential. TYK2 is a key component of the IFN-1 signaling pathway, which is increasingly recognized as a central pathogenic mediator in SLE. Other first-in-class targets with strong therapeutic potential include those targeting the complement system and adaptive signaling.” 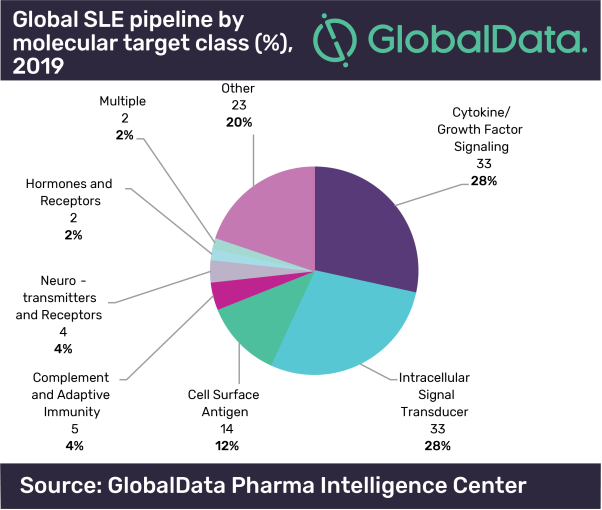 Needham adds: “Programs targeting cell surface antigens are prominent, comprising 12% of the pipeline. The remainder is made up of smaller target families, such as complement/adaptive immunity, neurotransmitters and receptors, and hormones and receptors.”

Systemic lupus erythematosus and lupus nephritis market to be worth $1.6bn by 2028 driven by launch of six pipeline therapies, says GlobalData
Lupus R&D landscape set to be dominated by partnerships between Big Pharma and small biotech