Europe witnessed growth in mergers and acquisition (M&A) deal volume and value in the fourth quarter (Q4) of 2019 amidst uncertainty around Brexit and the UK general election. M&A activity reported growth within Europe, with the region seeing an increase from 2,024 deals worth around US$120bn in Q4 2018 to 2,111 M&A deals worth around US$130bn in Q4 2019, says GlobalData, a leading data and analytics company.

Some of the notable M&A deals announced during Q4 2019 included the merger of International Flavors & Fragrances with DuPont Nutrition & Biosciences for US$26.2bn, the acquisition of InterXion by Digital Realty for US$8.4bn, and the merger of Flutter Entertainment with Stars Group for US$6bn. 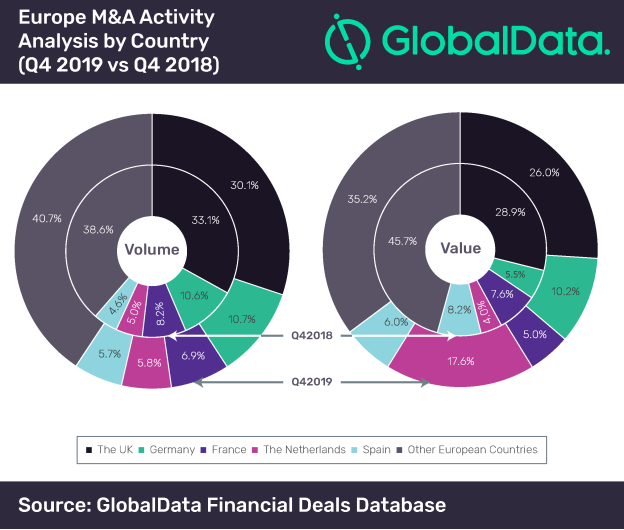 The UK, Germany, France, the Netherlands and Spain deal activity* collectively accounted for around 64.8% in total value and 59.3% in total volume in Q4 2019, with the UK occupying the top position followed by Germany and France.