Major global economies, including the US, the EU region, Indonesia, Russia and China, are set for a moderate slowdown in 2019 owing to uncertainties related to the protectionist policies advocated by various national governments, lower levels of consumer confidence and high levels of national debts, according to GlobalData, a leading data and analytics company.

Financial markets stayed weak across all the major economies in 2018. However, India, Brazil, Japan and Mexico are expected to sustain their growth momentum in 2019 owing to slower pace of monetary tightening, expected improvements in labor market conditions and stable domestic consumption. While the world economy is expected to witness an average 3.5% growth, the major 25 economies tracked by GlobalData are projected to achieve a lower average growth rate of 2.4% in 2019. 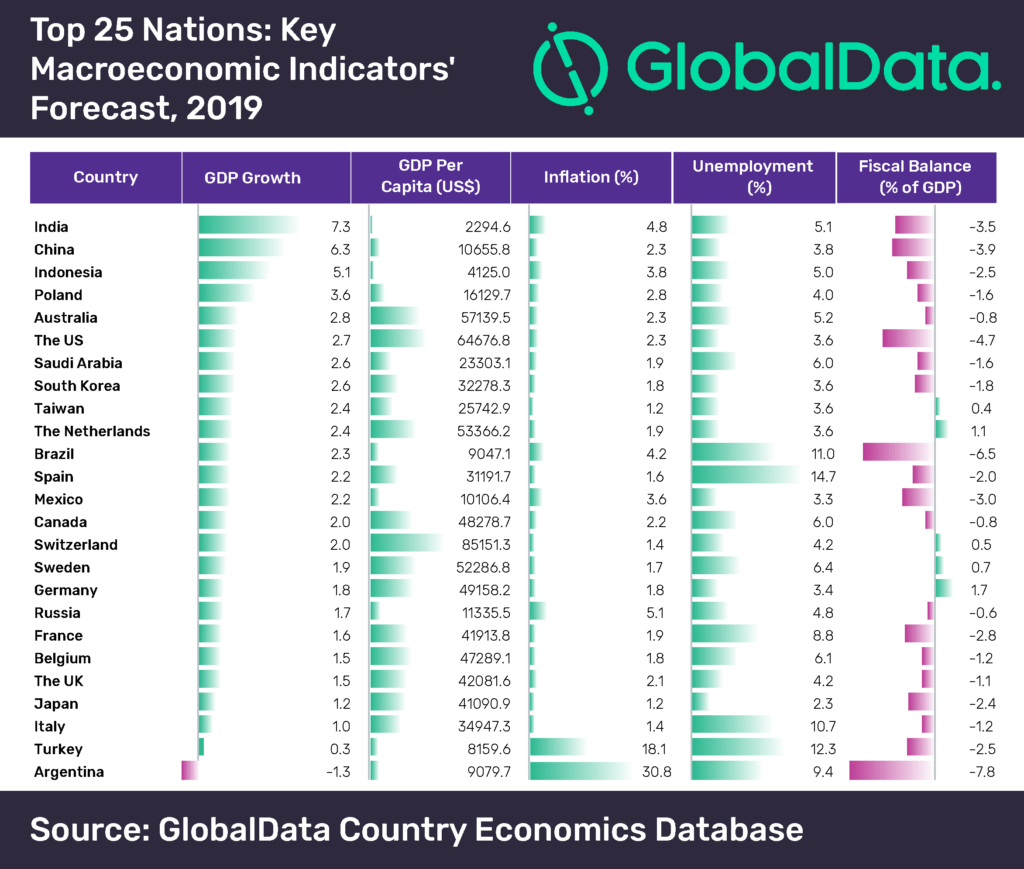 Amidst the political uncertainties and trade tensions, India, China and Indonesia are expected to remain as the top three fastest growing economies in 2019.

Jaison Davis, Senior Economic Research Analyst at GlobalData, states: “A more or less settled GST implementation, a good performing financial and professional services segment, an expected expansion in agriculture and related segments, and a stable flow of investments especially in the construction and manufacturing segments will help India to sustain its growth rate around 7.3% during 2019.”

GlobalData also reviewed a number of other major macroeconomic indicators, including:

Inflationary pressures to come into play

Several national governments are reviving domestic demand through public expenditure as a driver for economic growth. Most of them, including Italy, Colombia, Mexico and India, are also adhering to populist policies in 2019. Furthermore, the US dollar is expected to remain strong against the various national currencies including that of India, China, the UK, and the Economic and Monetary Union (EMU). Against this backdrop, the inflationary pressure across the top 25 global economies is forecasted to be 4.16% in 2019, up from 3.98% in 2018.

The average unemployment rate across the top 25 global economies is expected to narrow down to 6.05% from 6.15% in 2018. However, the unemployment will remain high in major economies like Argentina, Brazil, France, Spain and Turkey in 2019.

Davis continues: “Even with a ‘last minute deal’, Brexit is going to bring-in a lot of uncertainties. The EU is unwilling to renegotiate the offered deal and the UK parliament is unable to stand united behind their Prime Minister. Post-Brexit, even amidst the political assurances of a smooth transition, there would be structural adjustments in the labor market, with coverage from labor agreements, visa requirements and tax benefits, both in the EU and the UK. Unemployment in the UK is expected to rise during 2019.”

The fiscal deficits are expected to deteriorate further in countries such as the US, Turkey, Mexico, India and Brazil in 2019 from their previous year levels. The Congressional Budget Office indicates that the fiscal deficit of the US could be as close as US$1 trillion in 2019. With many of the foreign governments having their international loans in US dollar denominations, any future increase in fed rate will make the debt financing costlier, deepening the fiscal deficits of these nations. However, with many of the major economies, including those under IMF bailout program and those from the EU region, trying to strictly adhere to macroeconomic consolidation measures, the average fiscal balance as percentage of GDP amongst the top 25 global economies is expected to decline from 2% in 2018 to 1.9% in 2019.