The global cryptocurrency market has been hit by several factors such as an increase in interest rates, surging inflation and heightened recession fears, which have forced investors to stay away from riskier assets since the beginning of 2022. Against this backdrop, the volume of discussions around ‘cryptocurrency’ by social media influencers (Twitter influencers and Redditors) fell by more than 25% in Q2 2022* (April-June) compared to the previous quarter, reveals the Social Media Analytics Platform of GlobalData, a leading data and analytics company. 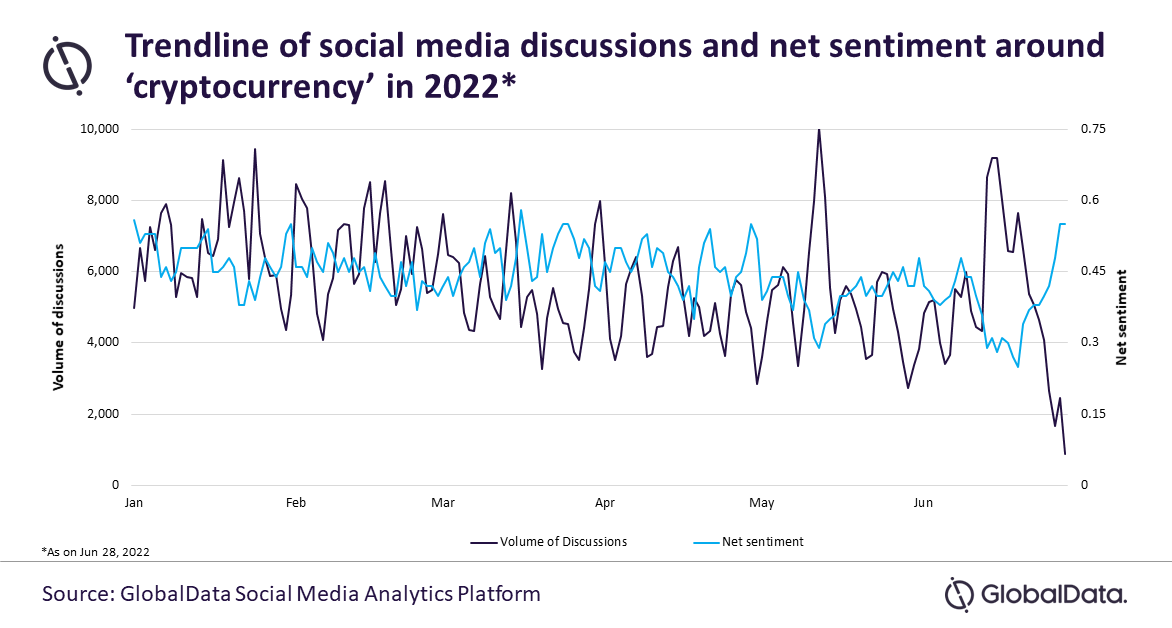 Smitarani Tripathy, Social Media Analyst at GlobalData, comments: “Most of the cryptocurrencies, including Bitcoin and Ethereum, have incurred consecutive losses in their market price due to macroeconomic factors, including the mounting pressure of the recession. Several Twitter influencers expect the bear market for crypto assets to continue as the multi-trillion dollar crypto bubble is imploding.”

On the contrary, a sharp recovery in influencers’ sentiment was noticed in the third week of June with a marginal recovery in crypto prices. Some influencers suggest investors to remain bullish on cryptocurrencies as they expect the market to recover in the near term.

Below are a few of the most popular influencer opinions captured by GlobalData’s Social Media Analytics Platform:

“Long-term Bitcoin #HOLDers aren’t worried as they’ve been through 73% declines before. But previous declines didn’t involve anywhere near the total market cap lost during this decline, nor did they involve massive leverage. This crash is just beginning. #Bitcoin will not recover.”

“Wait..there appears to be a large contingent of people that don’t realize crypto is worthless and was just a fun bubble trade”

“I’ve been saying for the last year or two that 99.99% of the 19,000+ cryptocurrency tokens out there are silly, stupid or fraudulent and are headed to $0. The Great Crypto Bubble is itself starting to unwind. The Luna Terra UST stable coin algo silliness… 1/”

“I’ve been checking dozens of charts and all I see is bearish retests/liquidity take. Confluence for the bearish main targets is insane, and that would be 40-60% down for altcoins. Hidden bearish divergences everywhere on htf. No reasons to be bullish yet.”

“Bitcoin now below 19k, a 72% crash from its all time high in November 2021. 1000s of other shitcoins have lost 99% of their value and disappeared. And even the other Top 10 “cryptocurrencies” have lost 80-90% of their value from their ATH. This Ponzi house of cards is collapsing”

“While the world is laughing at us for being “wrong”, we stack more #Bitcoin and are cheering at these opportunities.”

“I think we can all acknowledge that when things happen in #Crypto they happen quickly. Whether a new innovation or a dramatic implosion. This makes me believe that we won’t see a #cryptowinter but rather we will see a significant move higher once forced selling ends.”