Mobile services market in Bangladesh to grow at 2.2% CAGR over 2020-2025, forecasts GlobalData

Bangladesh mobile service revenue is poised to grow from US$2.9bn in 2020 to US$3.2bn in 2025 at a compounded annual growth rate (CAGR) of 2.2%, mainly supported by the rising adoption of mobile data services, according to GlobalData, a leading data and analytics company.

According to GlobalData’s Bangladesh Mobile Broadband Forecast Pack, mobile voice revenue will decline at a CAGR of 2.7% between 2020 and 2025, due to falling voice (average revenue per user) ARPU levels. Mobile data revenue, on the other hand, will increase at a CAGR of 13.6% over the same period, driven by growing 4G subscriptions and the subsequent rise in data ARPU. 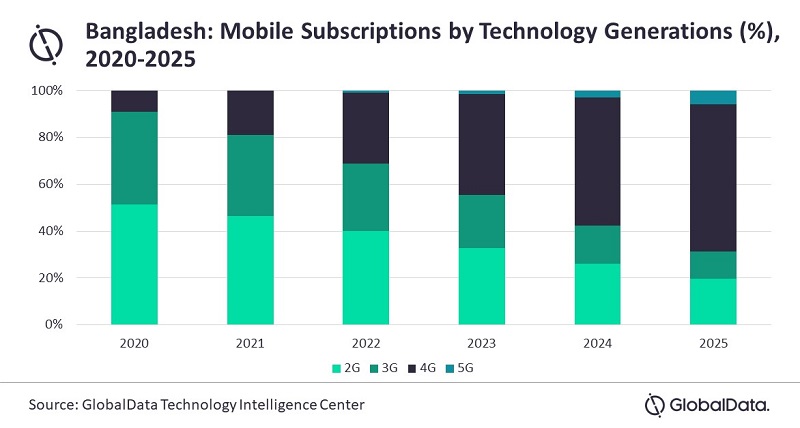 The average monthly mobile data usage is forecast to increase from 2.3 GB in 2020 to about 4.0 GB in 2025, driven by the growing consumption of high-bandwidth online entertainment and social media content over smartphones.

Hrushikesh Mahananda, Senior Research Analyst of Telecoms Market Data and Intelligence at GlobalData, says: “While 2G and 3G services currently account for a majority of mobile subscriptions, 4G subscriptions will surpass them both in 2023 and go on to account for 62.7% of the total mobile subscriptions share in 2025, driven by the ongoing 4G/LTE network expansion by operators and increase in the availability of 4G-enabled smartphones.

“Grameenphone led the mobile services market in Bangladesh in terms of mobile subscriptions in 2020, followed by Robi.  Grameenphone accounted for 19.8 million 4G users and expanded its 4G/LTE service to 91.1% of the population as of December 2020. The company will retain its leading position through 2025, supported by the continued investments in 4G network expansion to drive 4G user base.”