Mobile wallet adoption is gradually displacing traditional payments such as cash and cards in India. This has become even more prevalent during the current COVID-19 crisis and as a result mobile wallet transaction is expected to surpass INR100 trillion (US$1.40 trillion) in 2024, according to GlobalData, a leading data and analytics company.

An analysis of GlobalData’s Payment Instrument Analytics reveals that mobile wallet transactions in India were valued at INR384bn (US$5.4bn) in 2016. With consumers increasingly switching from cash to electronic payments, the value is expected to reach INR100.6 trillion (US$1.41 trillion) in 2024.

In terms of transaction volume, an estimated 23.5 billion mobile wallet transactions will be carried out in 2020, which is expected to more than double to 54.7 billion in 2024.

Ravi Sharma, Lead Banking and Payments Analyst at GlobalData, comments: “With rising smartphone penetration and proliferation of mobile wallet brands, mobile wallets have now become an integral part and are widely accepted by merchants of all sizes, from big supermarkets to neighborhood kirana shops.”

The acceleration of electronic payments has been one of the key objectives of the government’s ‘Digital India’ campaign. The government has been investing substantially in building long-term infrastructure for cashless payments.

The introduction of Bharat QR, an interoperable QR code by the government agency ­- National Payments Corporation of India, is an important milestone in this regard and paved the way for significant usage of mobile wallets. 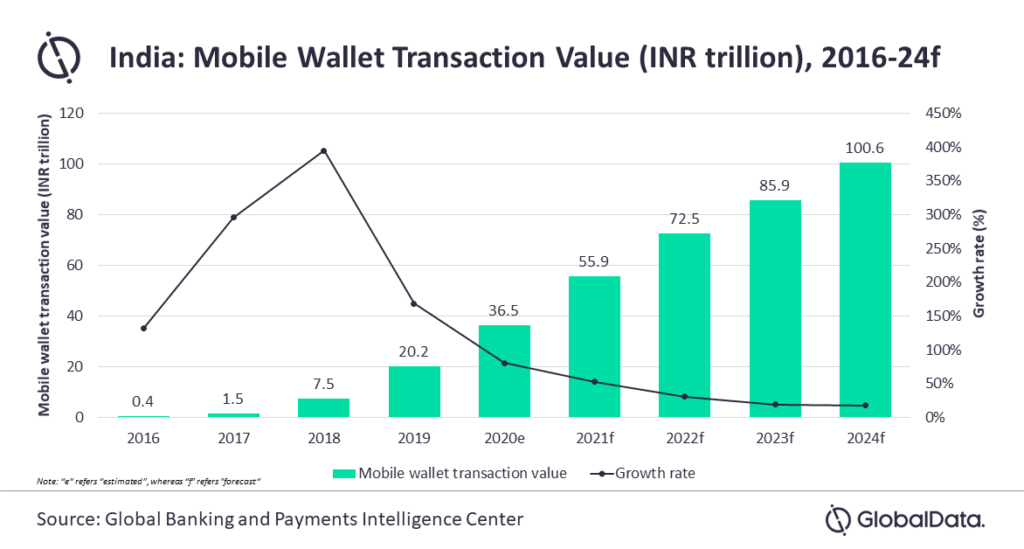 While there has been a constant rise in mobile wallet adoption in the past few years, the recent COVID-19 outbreak has further accelerated this trend as consumers are increasingly using wallets to avoid physical contact with POS machines.

GlobalData’s 2020 Banking and Payments survey* reveals that Google Pay is the most preferred mobile wallet brand with more than 43% of the respondents having this wallet, followed by Paytm (36%).

Mr Sharma concludes: “Mobile wallet usage is all set to disrupt the overall consumer payment space in India. While the government’s demonization move (making 500 and 1,000 rupees notes illegitimate) in late 2016 had set the precedent, further decline in cash usage could be seen during the current COVID-19 crisis. Increasing smartphone penetration, widespread QR code infrastructure and rising consumer and merchant preference for electronic payments will further accelerate this trend.”