Morgan Stanley held the top rank in the latest M&A league table of the top 10 financial advisers for the ICT sector for Q3 2018, compiled by GlobalData, a leading data and analytics company.

The bank took the top spot driven mostly by its top deal – Broadcom’s acquisition of CA Technologies for $18.9bn – apart from a total 13-deal wave (the highest number of deals for the sector in Q3 2018) that amounted to $43.8bn.

According to GlobalData, which uses its tracking of all merger and acquisition, private equity/venture capital and asset transaction activity around the world to compile the league table, Bofa ML and Citi stood second and third with $40.8bn and $33.0bn, respectively.

Prakhar Baghmar, Financial Deals Analyst at GlobalData, said: “The Broadcom-CA deal turned the tables in this sector, as four of its advisers made it into the top five. Despite equaling Morgan Stanley on the highest number of deals, Goldman Sachs settled at the bottom of the table due to low-value transactions.” 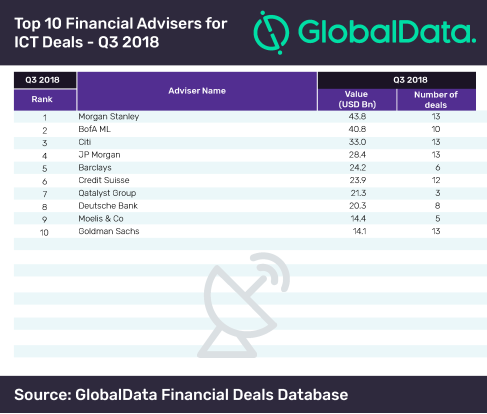 US-based law firm Morrison & Foerster led the top 10 legal advisers table for Q3 2018 with a value of $32.4bn. Despite accumulating the highest number of deals at 35, Kirkland & Ellis could only take third rank with a value of $23.9bn. Legal firm Cleary Gottlieb Steen & Hamilton – one among the three with the least number of deals – managed a dynamic climb to the second spot by advising on high-value transactions. 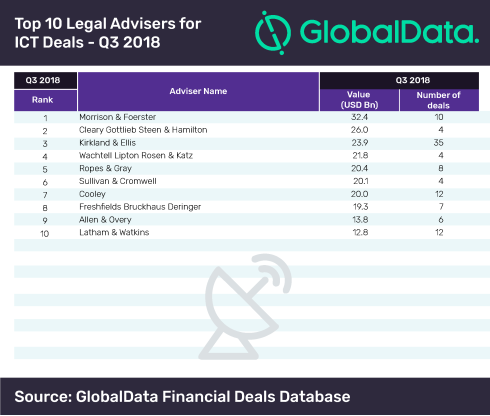