Morgan Stanley gained top spot in terms of deal value by advising on 24 deals worth US$81.8bn, which was the highest value among all the advisers. On the other hand, Piper Sandler led in volume terms having advised on 28 deals worth US$5.8bn.

Aurojyoti Bose, Lead Analyst at GlobalData, comments: “While all the top 10 advisers by value were able to surpass the US$10bn mark, Morgan Stanley was able to advise on nine billion-dollar deals (greater than or equal to US$1bn), out of which three were megadeals (>US$10bn). These high-value transactions helped it to top the list by value.

“On the other hand, despite advising on the highest number of deals Piper Sandler failed to touch US$10bn mark and did not feature among the top 10 advisers by value.”

In contrast, Goldman Sachs occupied the second position, both in terms of value and volume, with 25 deals worth US$78.3bn. 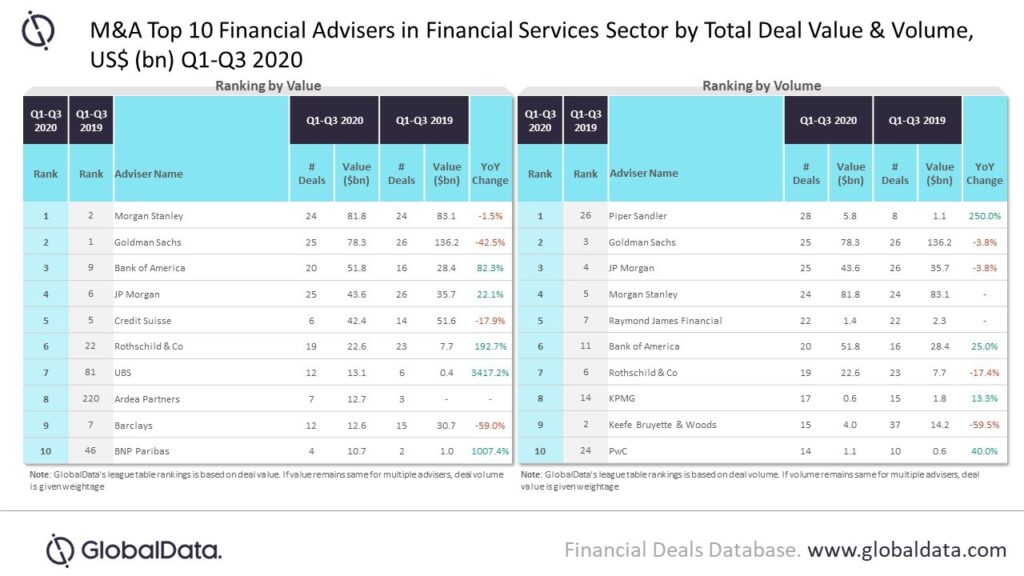 Deal activity in Asia-Pacific likely to remain muted for some more time in 2021, says GlobalData
Surge of bio/pharma special purpose mergers and acquisitions should be viewed with skepticism, says GlobalData
Despite inconsistent M&A deal activity, China continues to be key global growth engine in Q4 2020, reveals GlobalData
Tencent leads in M&A activity by volume in 2020, says GlobalData
Morgan Stanley and Evercore were top M&A financial advisers by value and volume in global oil and gas sector for 2020, finds GlobalData