GlobalData compiles the league table using its own tracking data of all merger and acquisition, private equity/venture capital and asset transaction activity globally.

According to the company, advising on the industry’s top three high-value deals during the quarter helped Morgan Stanley to achieve the top spot.

The top three deals registered in the financial services industry during Q2 2018 were Capital One’s sale of $17bn worth of mortgages to DLJ Mortgage Capital, Ant Financial’s $14bn series C fundraising and Barclays Bank’s proposed acquisition of Bradford & Bingley’s $7.4bn worth of assets.

In volume terms, Sandler O’Neill achieved the top position with 22 deals to its credit during the quarter, followed by Goldman Sachs with 13 deals. These two firms were ranked 9th and 8th by value, respectively. 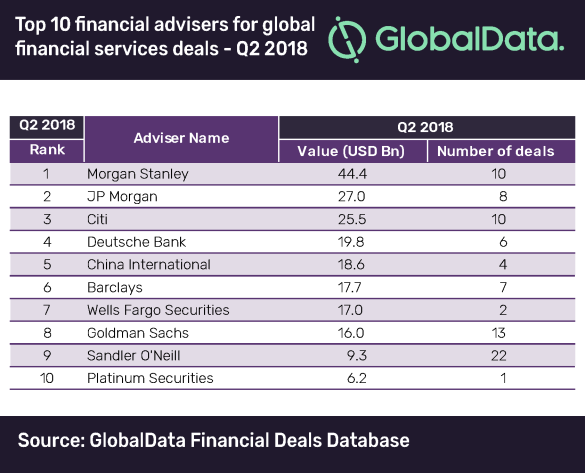 Being the sole adviser to the industry’s biggest deal during the quarter, Wachtell Lipton cruised to the top of GlobalData’s league table of M&A legal advisers in the financial services sector. With 11 deals, valued at $24bn, the company also achieved the highest deal volume during the review period. 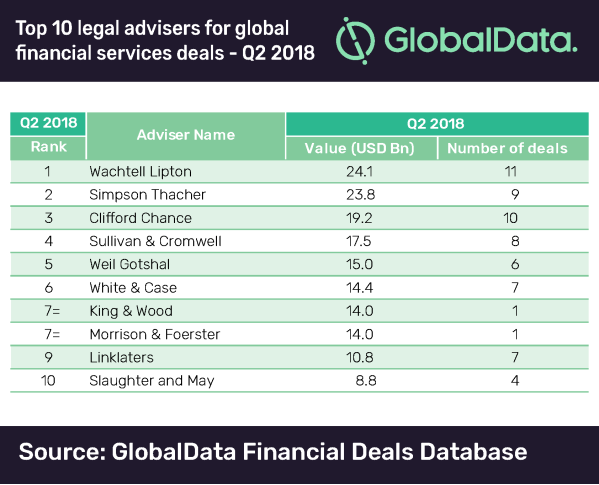