Active participation of operators in the mobile black spot program to expand mobile service coverage in underserved areas and strengthening of fiber-to-the-home (FTTH) connectivity as part of the government’s national broadband network (NBN) initiative will drive Australia’s telecom market between 2018 and 2023, according to GlobalData, a leading data and analytics company.

GlobalData’s ‘Australia Country Intelligence Report’ reveals that mobile data revenue will remain the largest contributor to telecom market during the forecast period, driven by increasing smartphone subscriptions, expanding long-term evolution (LTE) networks, growth in the use of 4G services and the expected launch of commercial 5G services in 2020.

The share of smartphone in total handset subscriptions is expected to reach an estimated 94.3% by 2023, as all the major mobile network operators (MNOs) in the country continue to promote easy monthly bundled plans on smartphone purchases. 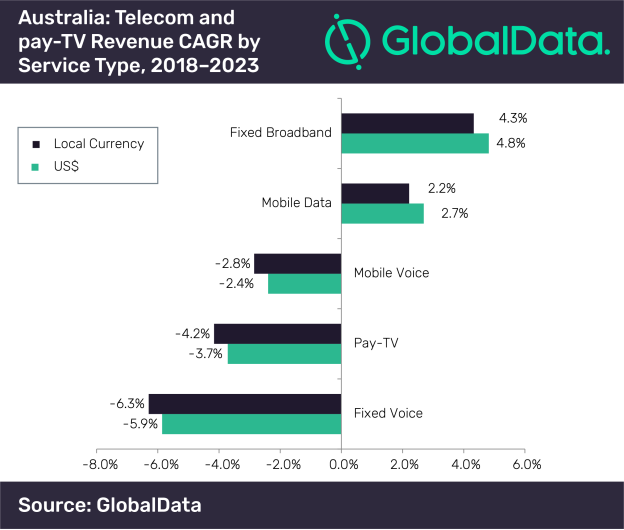 Deepa Dhingra, Telecom Analyst at GlobalData, says: “4G will continue to be the most adopted wireless network technology through the forecast period. However, with the auctioned 5G spectrum licenses commencing operations from March 2020 and major MNOs accelerating their 5G network rollouts, 5G is expected to be commercially available in 2020 and account for an estimated 26.1% of the total mobile subscriptions by 2023.”

Mobile voice revenue will decline over the forecast period due to a significant drop in monthly usage rates and the overall voice average revenue per user (ARPU). Fixed voice revenue will also see a decline in value as a result of falling circuit-switched lines and declining fixed voice ARPU.

In the pay-TV market, GlobalData expects that increasing substitution of pay-TV services with over-the-top (OTT) video streaming applications will drag down pay-TV revenues through 2023.