Entering into 2019, the global oil and gas industry remains cautiously optimistic as recovering oil prices have boosted companies’ profits and a rebound in new projects is expected. An increase in European greenfield startups is expected in 2019 as companies leverage infrastructure to commercialize small fields in the region, says GlobalData, a leading data and analytics company.

The company’s latest research indicates that there are 20 European greenfield projects coming online during 2019. The European hydrocarbon market is set to see a higher volume of oil flow from new projects driven largely by the introduction of Norway’s giant Johan Sverdrup as well as a number of junior exploration and production companies (E&Ps) targeting first oil in the UK.

Daniel Rogers, Upstream Oil & Gas Analyst at GlobalData, comments: “European greenfield project startups were at the lowest levels in over 40 years in 2018, but are expected to recover in the medium term. These projects are predominantly shallow water developments in the UK and Norway with a mix of platform and subsea projects. The absence of deep and ultra-deep water projects is notable, stemming from a lack of project sanctioning and capital commitment during the period of deflated oil prices.” 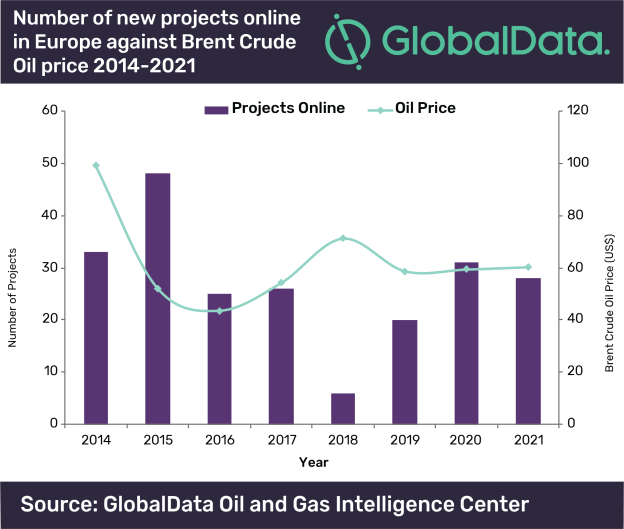 A number of noteworthy projects are set to begin production in Europe in 2019. The most significant is the giant Johan Sverdrup, offshore Norway, forecast to account for 15% of Norway’s production at peak rate. The 2-3 billion barrels of oil equivalent (boe) field is set to produce first oil in the third quarter of 2019. In addition, Hurricane Energy and Decipher Energy are junior E&Ps focused on the UK, looking to produce first oil for the company in 2019, from Lancaster and Orlando respectively. Both companies have taken new approaches to old discoveries, and leveraged off advancements in technology and regional expertise to deliver value.

Rogers adds: “60% of European developments coming on-stream in 2019 are fields that contain less than 50 million boe of recoverable reserves. For the UK in particular, cross company and government collaborations have helped to improve project commerciality over recent years, exploration strategies focusing on near field acreage or asset led campaigns have allowed smaller discoveries to be monetized with little upfront capital.

“Over the next few years, Europe is set to see an uptick in projects coming online but with conservative growth as companies become leaner and more selective.”