Non-hydro renewable is expected to show the highest growth rate in Vietnam, registering a compound annual growth rate (CAGR) of 22.4%, due to government policies and the untapped renewable potential, according to GlobalData, a leading data and analytics company.

GlobalData’s latest report, ‘Vietnam Power Market Outlook to 2030, Update 2019 – Market Trends, Regulations, and Competitive Landscape’, reveals that the country has been struggling to develop its energy industry due to a lack of state funds. The country’s coal reserves are depleting, and the government is looking to expand the energy mix. Due to the government support and abundance of untapped renewable potential, installed non-hydro renewable capacity is forecast to reach 19.9 GW by 2030.

Anchal Agarwal, Power Industry Analyst at GlobalData, commented, “In Vietnam, market development of renewable sources such as wind and solar is in nascent stage. Hydropower potential is nearly exploited; in contrast, wind, and solar expansion potentials are high and to a great extent untapped. Against this backdrop, Vietnam has revised its 7th Power Development Plan (PDP7) and set the priorities for developing renewable energy sources such as wind, solar, and biomass. Projections are to increase the percentage of renewable energy power to 7% by 2020 and 10% by 2030.

As of 2018, hydropower dominated the Vietnam power mix, with a share of 40.2% of the total installed capacity, followed by coal and gas with 38.9% and 15.9% share respectively. Non-hydro renewable power technologies accounted for a share of 2.1% in 2018, out of which, 1.3% was contributed by biopower, followed by wind and solar with 0.5% and 0.3% respectively. 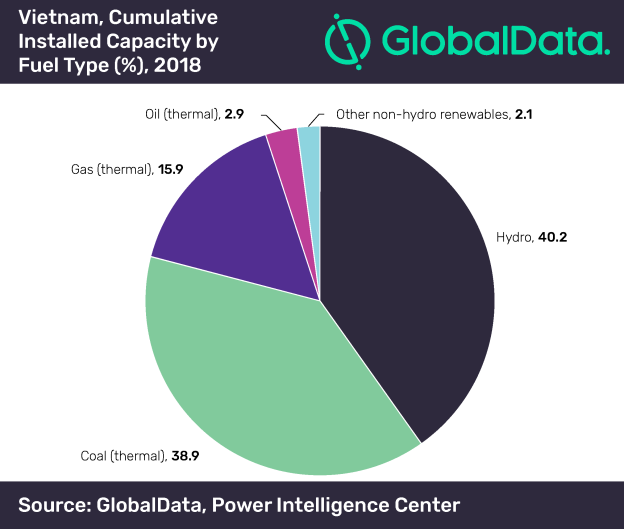 However, there are several challenges currently facing the Vietnam power sector. The country’s biggest challenge is how to mobilize the large investment requirements, estimated at around US$8bn annually to meet fast growing power demand.

Low electricity prices, limited funding, slow pace of major power projects and lack of private sector interest, including that of foreign investors, are some of the other challenges facing by Vietnam’s power sector.

Agarwal concludes, “In spite of certain roadblocks, investment is happening in the country’s renewable power sector. Vietnam is trying to reduce its dependence on fossil fuels for electricity generation and more emphasis is given to the development of solar, wind and other renewable resources.”