The company’s report, ‘Global Oil and Gas Pipelines Industry Outlook to 2023 – Capacity and Capital Expenditure Outlook with Details of All Operating and Planned Pipelines’, reveals that North America and Asia are likely to have new-build pipeline lengths of 42,580.4 km and 42,579.2 km, respectively by 2023.

Varun Ette, Oil and Gas Analyst at GlobalData, comments: “North America and Asia are expected to witness operations of 259 new-build pipelines by 2023, of which 148 are planned and announced pipelines in North America. Keystone XL Project is the longest upcoming pipeline in the region with a length of 1,897.0 km.” 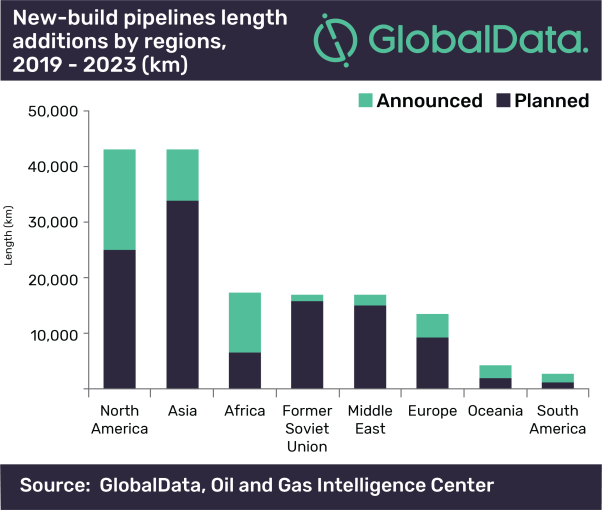 GlobalData expects that Asia will have 111 new-build pipelines by 2023, of which 76 are planned and the rest are early-stage announced pipelines. Power of Siberia 1 (China Section) is the longest upcoming gas pipeline in the region with a length of 3,371.0 km.

Ette concludes: “Africa is the third-highest contributor to the global new-build planned and announced pipeline length additions by 2023 with a length of 16,912.2 km. Trans Saharan Gas is the longest upcoming pipeline in the region with a length of 4,400.0 km.”