North America is expected to witness the highest global small-scale liquefied natural gas (LNG) liquefaction capacity additions in the world, expected to contribute around 37% of the global additions by 2024, says GlobalData, a leading data and analytics company.

The company’s report, ‘Global Small-Scale LNG Liquefaction Capacity and Capital Expenditure Outlook, 2020–2024 – North America leads Globally on Capacity Additions and Capital Expenditure Outlook’, reveals that North America is likely to witness total small-scale LNG liquefaction capacity additions of 7,270 kilo-tonnes per annum (ktpa) by 2024. Of this, the capacity of planned projects that have received necessary approvals for development accounts for nearly 2,890ktpa, while the remaining capacity of 4,380ktpa is expected to come from early stage announced projects.

Haseeb Ahmed, Oil and Gas Analyst at GlobalData, comments: “North America is expected to witness the start of operations of 26 new-build small-scale LNG terminals by 2024. Of these, nine are planned terminals and the remaining 17 are announced. Browntown II and Browntown in the US are the largest upcoming small-scale LNG terminals in the region, with a capacity of 2,120ktpa each by 2024.” 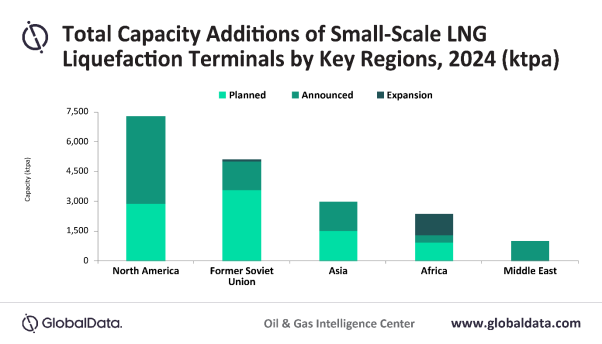 GlobalData identifies the Former Soviet Union (FSU) as the second-highest contributor to the global small-scale LNG capacity additions, contributing around 26% or 5,120ktpa by 2024. The region is expected to witness start of operations of seven planned projects and eight announced projects. The top three largest upcoming small-scale LNG terminals in the region are situated in Russia – Portovaya, Astra, and Moshik – with respective capacities of 1,500ktpa, 800ktpa, and 510ktpa.

Ahmed continues: “Asia ranks third across the globe contributing around 15% of the world’s small-scale LNG capacity additions during the outlook period 2020–2024. The region has 16 upcoming projects, of which 14 are planned and the remaining two have been announced. China’s Xi an is the largest upcoming small-scale LNG terminal in the region with a capacity of 1,400ktpa by 2024.”