Novo Nordisk’s Ozempic digital marketing in Australia can be exemplar for other players in type 2 diabetes space, says GlobalData

21 Jul 2021
Novo Nordisk’s Ozempic digital marketing in Australia can be exemplar for other players in type 2 diabetes space, says GlobalData

The type 2 diabetes (T2D) treatment landscape in Australia is mature with the availability of generics, insulin biosimilars and novel therapies. In this competitive market, pharma digital marketing is minimal. However, Novo Nordisk has successfully implemented a digital strategy for its newly launched drug Ozempic (July 2020) and can be an exemplar for other leading players in T2D space, says GlobalData, a leading data and analytics company.

According to GlobalData’s ‘Pharmaceutical Intelligence Center’, the number of diagnosed prevalent cases in Australia is estimated to grow at a compound annual growth rate of 6.33% from 1.27 million in 2021 to 1.67 million in 2028.

In Australia, metformin is the most prescribed drug for T2D. However, new classes of drugs such as GLP-1R agonists, DPP-4 inhibitors, and SGLT-2 inhibitors are highly effective in disease management. For example, Novo Nordisk’s Ozempic is a once-weekly GLP-1 analog in an injectable formulation.

Venkat Kartheek Vale, Pharma Analyst at GlobalData, comments: “Australia is one of the key geographies in the T2D market for global pharma companies due to the increasing prevalence of the disease. Furthermore, the awareness of T2D-related cardiovascular and cardiorenal complications is a big unmet need in this market and therefore there is an opportunity for new players to focus on this segment. In this setting, implementing the right digital marketing strategy to promote disease awareness among patients will help companies with novel molecules gain an edge over other players.” 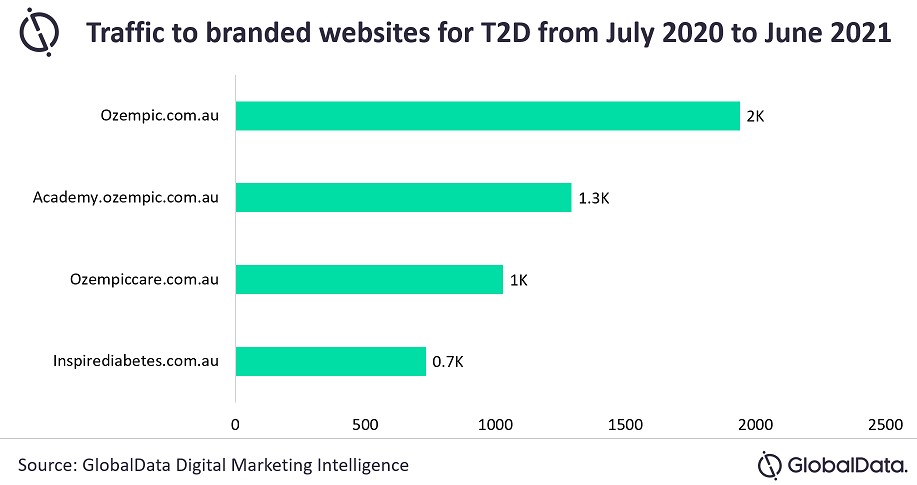 An analysis of traffic over the last 12 months revealed the highest traffic to the branded websites of Novo Nordisk’s Ozempic. Conversely, traffic has been very low for AstraZeneca’s Inspirediabetes.com.au although it supports two branded drugs, Forxiga and Xigduo XR.

Furthermore, a recent survey by Diabetes Australia revealed that the widespread misunderstanding and stigma about diabetes within the community drive high rates of mental health problems for more than 25% of T2D patients.

Mr Vale concludes: “Though the T2D treatment landscape is well established in Australia, lack of digital activity by pharma looks like a major unmet need. Using digital marketing channels to promote disease and treatment awareness to patients will help pharma to improve general understanding of T2D and its complications as well as address the unmet needs and gain the confidence of patients.”