Oil and gas companies getting attracted towards enormous resource potential of the Arctic region, says GlobalData

The Arctic region is largely under-explored due to its cold, harsh climatic conditions, frozen seas and lack of investment in infrastructure development. However, this picture is gradually changing. Dwindling oil and gas reserves worldwide is raising the case for exploration and production (E&P) companies to venture into the Arctic in search of hydrocarbons, according to GlobalData, a leading data and analytics company.

The company’s latest thematic report, ‘Arctic Exploitation’, evaluates the competitive position of different Arctic countries in tapping the hydrocarbon reserves of the region.

E&P activities in the Arctic are primarily concentrated in the onshore and shallow water regions of Russia, Norway, and the US. Arctic operations of Russia and Norway are aimed improving their hydrocarbon reserves to overcome the anticipated decline in output from aging fields in other regions.

Ravindra Puranik, Oil & Gas Analyst at GlobalData, comments: “Russia has the natural advantage of having the longest coastline along the Arctic, giving it the territorial right to explore its continental shelves. With incentives from the Russian Government and financial support from China, Russian oil and gas companies such as Gazprom, Rosneft and Novatek are looking to develop the Arctic region into a new oil and gas hotspot.

“These companies are benefiting from global warming as the shrinking ice cover is enabling maritime activities in the region. By integrating strategic planning with resource development, Russia is working towards converting the Northern Sea Route as a cost-efficient alternative to the Suez Canal and profit from trade and industrialization in the Arctic.”

For operators in the US, the productive shale patches in the Lower 48 region continue to gain preference over oil and gas fields in the Alaska North Slope. The major incentive for the US in exploring the Arctic is to protect its maritime boundaries and counter the growing influence of Russia and China in the region.

GlobalData’s thematic research identifies oil and gas companies such as Gazprom, Rosneft, Novatek, Equinor, and Hilcorp Energy as the key companies in the Arctic exploitation theme based on their recent activities in the region. 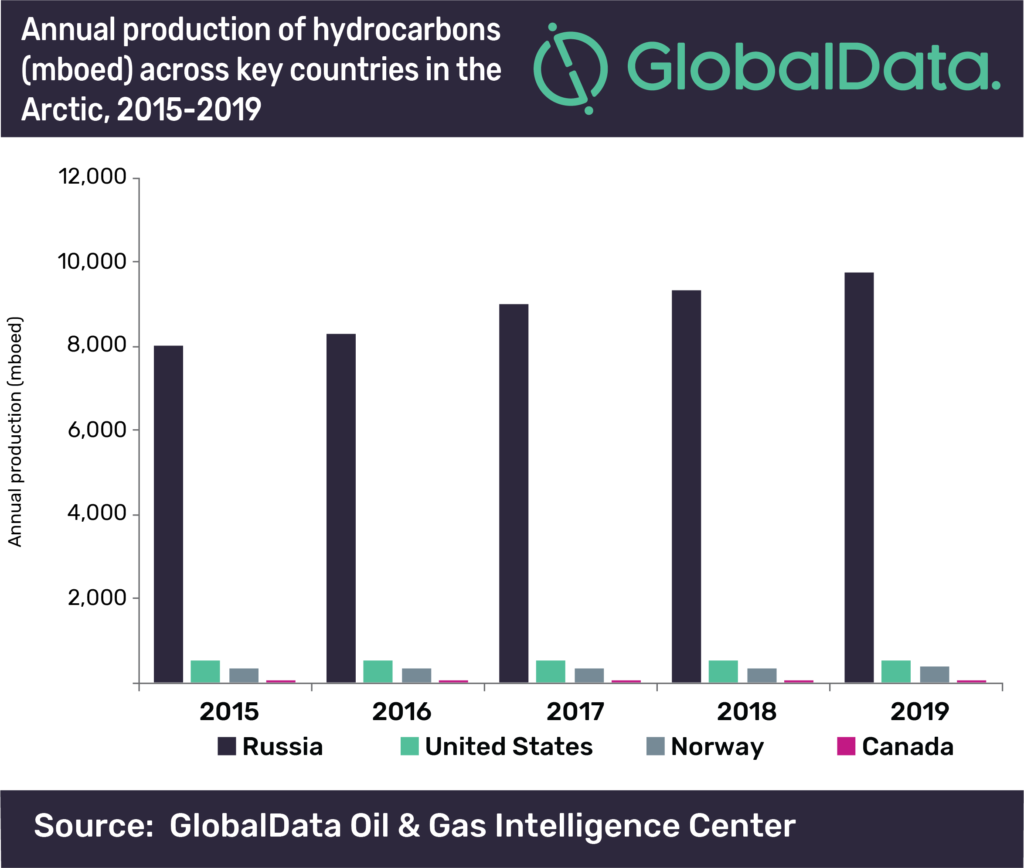 IMAGE Available: Annual production of hydrocarbons (mboed) across key countries in the Arctic, 2015-2019

Puranik continues: “The Yamalo-Nenets Autonomous region of Russia continues to attract greater E&P activity from operators, such as Gazprom, Novatek, and Rosneft. Novatek is developing the region into a liquefied natural gas (LNG) hub with one liquefaction terminal presently operational and a few more in the pipeline. In the neighboring country of Norway, Equinor and other operators are evaluating the possibility of exploring the Barents Sea for natural gas prospects similar to the Snovhit gas field. The Beaufort Sea remains a key area of interest among E&P operators in the US, such as Hilcorp and Eni. However, strong resistance from environmental groups have hindered E&P activities in offshore Alaska.”

Environmental groups have repeatedly opposed E&P activities in Arctic countries in an attempt to safeguard the sensitive ecology of the region. Lately, these groups have received substantial backing with the adoption of the United Nations’ Climate Change Framework of 2015. The framework has also prompted several financial institutions including Royal Bank of Scotland, Societe Generale, Goldman Sachs, and ABN Amro to discontinue their exposure to oil and gas projects in the Arctic.

Puranik concludes: “The call for limiting industrialization in the Arctic is bound to be severe in this new decade and might dictate the future direction of E&P operations in the region.”

Russian and Norwegian companies to drive oil and gas industry in the Arctic, says GlobalData