The e-cigarette (e-cig) industry has been increasingly viewed as one of the most disruptive changes in the global tobacco market and this is no different for India. India’s e-cig market is poised to grow at a compound annual growth rate of 34% from INR4.1bn in 2017 to reach INR7.4bn in 2019. This tremendous growth is mainly driven by smokers opting for e-cig as they believe it can help them quit smoking, according to leading data and analytics company GlobalData.

e-cigs are mainly positioned as a smoking cessation product in India. However, due to lack of confidence on linking vaping to smoking cessation, seven states have currently banned e-cigs sales in their respective states. Nevertheless, consumers in India are opting for e-cigs as a method to quit smoking as they are perceived to provide a nicotine kick while avoiding the harmful contents present in a traditional cigarette. This is also evident in a consumer survey conducted by GlobalData, where in 53% of the vapers lie in the mid-age group of 30-49 years, who have a history of smoking and thus opt for vaping to curb the habit.

Majority of the vapers were dual users

According to the survey, e-cigs being in its infancy has majority (90%) of its vapers as dual users who vape them along with smoking traditional cigarettes. These dual users in their pursuit to quit smoking, replace one or more instances of smoking with vaping in order to replace it entirely. It was also observed that 92% of these vapers vaped with their friends, vaped a few times a week (53%) and preferred menthol (25%) as a flavor. 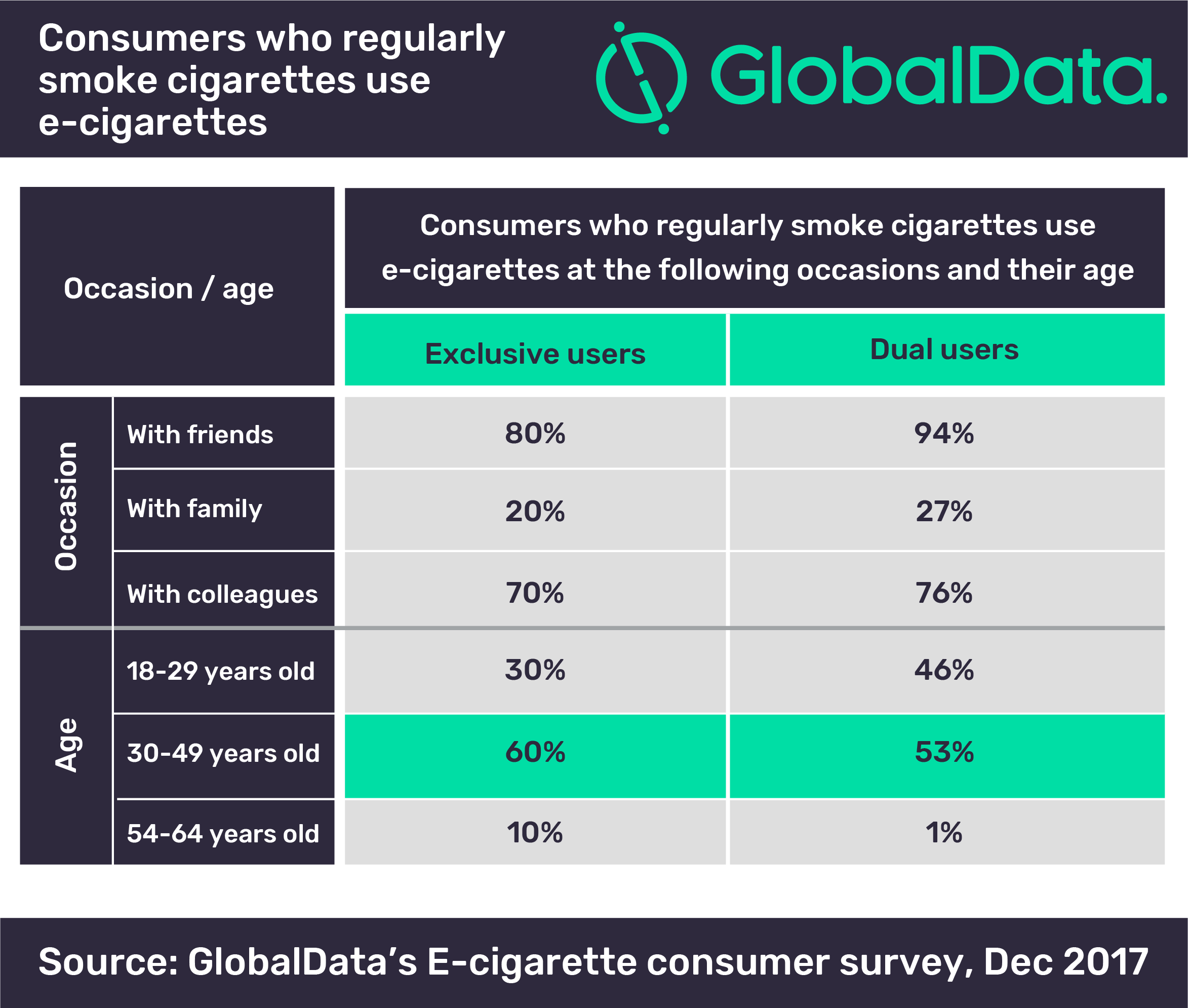 Moreover, both dual and exclusive users who mainly lie in the mid-age group also believed that vaping is safer (67%) than traditional cigarettes and thus opt for vaping devices as a cessation product. This is contrary to young users who also vape for recreational purposes.

The lack of clear medical evidence and uncertainty have led multiple states to ban the sales of e-cigs as they term them to be equally harmful as traditional cigarettes if not less. Thus, though the industry exists from more than a decade now in India, it has struggled gaining penetration when compared to traditional cigarettes.

Currently, seven states in India–Punjab, Bihar, Mizoram, Karnataka, Jammu and Kashmir, Kerala and Haryana– have banned the sales of E-cigs and more are expected to follow suit. Though these states have banned the sales of E-cigs, the usage of the same is not regulated and thus online sales in these states will continue to flourish due to no clear guidelines.

Sanjeev Raikar, lead analyst of consumer market at GlobalData, says: “Due to unclear regulations and import policies, E-cigs market in India is dominated by imported devices and consumables. Majority of these devices are imported from China while e-liquids come mainly from China and Malaysia. This uncertainty in regulations has also raised skepticism amongst domestic manufacturers, which is in turn driving imports.”

While these high imports have led to fragmentation, nevertheless, consumable brands such as Naked, iVape and Fantasi Malaysia have managed to lead the market with a sizable portion. On the other hand, domestic players such as ITC Ltd and GPI Ltd with their large presence in disposables and closed-style rechargeable devices, constituted a much smaller share in the overall market pie.

This vaping trend will only increase in the near future as more smokers join the bandwagon even though more number of states join the ban. This is credited to word-of-mouth, as vapers advocate their vaping experience and thus add vapers. Similarly online channel, which is the major channel of e-cigs distribution, is expected to further drive the industry in the near future as there is no clear regulation to monitor sales.

It is also expected that vapers will opt for more expensive and sophisticated devices such as mod styles and vape pens away from disposables and closed style rechargeable devices, while experienced users will use more than one device based on their preference.