PAH market forecast to grow at 5% CAGR by 2029, says GlobalData

With recent pipeline approvals of varying mechanisms and an influx of newly diagnosed patients, the pulmonary arterial hypertension (PAH) market is expected to grow at a 5% compound annual growth rate (CAGR) from 2019 to 2029 in the seven major markets*, says GlobalData, a leading data and analytics company.

Kajal Jaddoo, Associate Pharma Analyst at GlobalData, comments: “The overall level of unmet need in the PAH market is high. The currently available drugs work to slow progression of this cardiopulmonary disease, but there is no marketed drug that addresses the underlying disease mechanism and targets curing the patient. 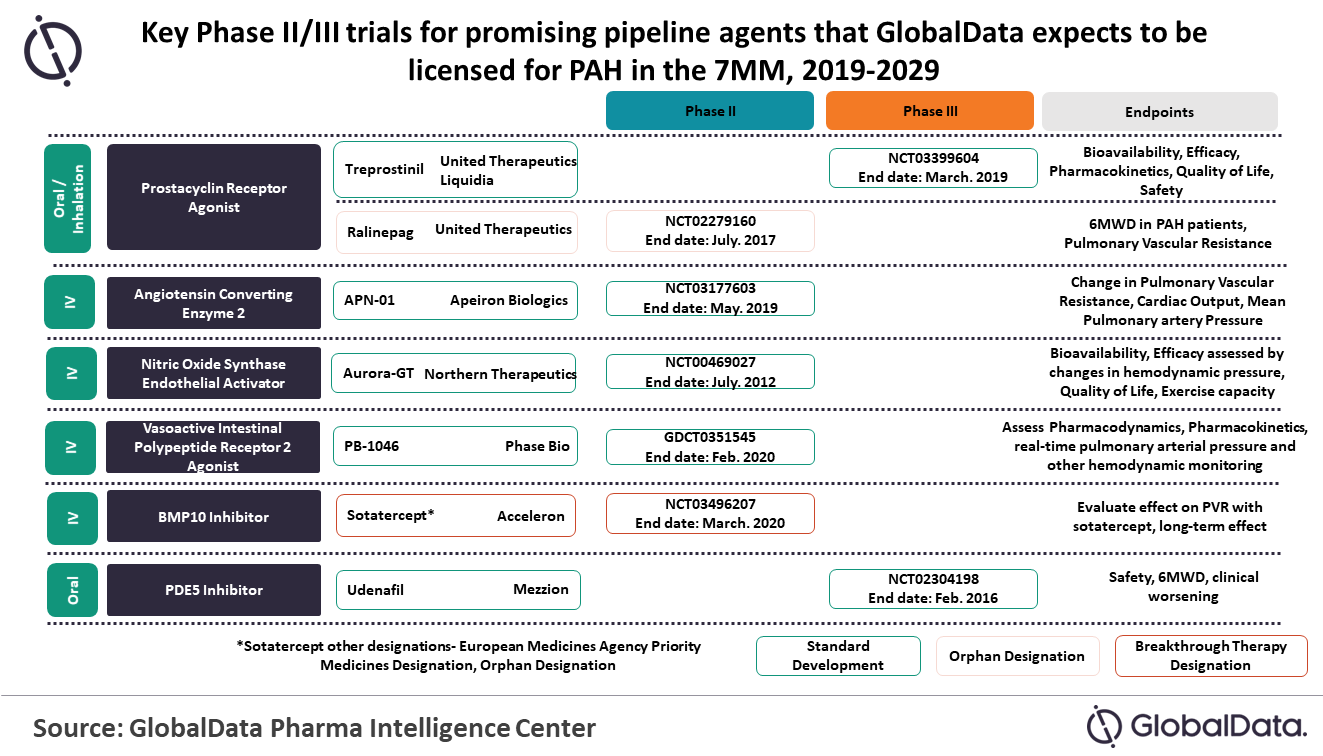 According to GlobalData’s Drugs Database, there are five PAH drugs in late-stage clinical development (Phase IIb or later) and 27 more in early stages (Phase I and Phase II).

Jaddoo continues: “Currently in late-stage development, Trevyent and ralinepag’s easier, more convenient and less error-prone drug administration demonstrate that they have the potential for clinical superiority over existing prostacyclin receptor agonists (PRAs) within PAH. Ralinepag by 2029 is forecasted to make up 13% of overall PRA sales.

“Another late-stage drug, APN-01, is administered intravenously and has demonstrated improved cardiac output without worsening pulmonary hypertension in clinical trial results, and key opinion leaders have indicated that it could serve as an add-on therapy to already established combination therapies

“The near-term pipeline also includes a PDE5 inhibitor, Udenafil, which will be the third of its kind to be launched. If approved, it will face fierce competition from Adcirca and Revatio. Clinical trials have shown its effective in improving exercise capacity in PAH patients.

“Finally, PD1046 and Aurora-GT have the potential to capture a target patient population with severe PAH (functional class III and IV), if approved, as both drugs have a novel mechanism of action in the PAH space.”

Over the past decade, the PAH disease space has consisted mainly of reformulations of existing PAH drugs and the repurposing of drugs from other disease markets. Existing players in this space have focused on improving treatment delivery options, especially in the case of the prostacyclin analog class. PAH therapies also typically focus on dilating partially occluded vessels and are weak anti-proliferative agents that are not effective in reversing vascular remodeling.

“While the potential launch of the late-stage pipeline agents will increase the number of pharmacological treatment options that can be offered to PAH patient populations with high unmet need, such as functional classes 3 and 4, some patients may not benefit from them due to challenges associated with gaining favorable reimbursement due to their anticipated high annual cost of therapy.”