Petroleo Brasileiro (Petrobras) continues to dominate global floating production storage and offloading vessel (FPSO) deployments with operatorship in 15 planned and announced projects during the outlook period 2019 to 2025, according to GlobalData, a leading data and analytics company.

The company’s report, ‘Q4 2019 Global FPSO Industry Outlook – South America Spearheads Global FPSO Deployments’, reveals that Petrobras is expected to deploy six planned and nine announced FPSOs by 2025. It is expected that 2023 will witness the highest number of FPSO deployments with four.

Adithya Rekha, Oil and Gas Analyst at GlobalData, explains: “Petrobras is expected to add a total crude oil production capacity of 1.5 million barrels per day (mmbd) through its upcoming FPSOs by 2025. Among the upcoming FPSOs operated by Petrobras, Mero 3 and Mero 4 will have the highest crude oil production capacity of 0.2 mmbd each during the outlook period.” 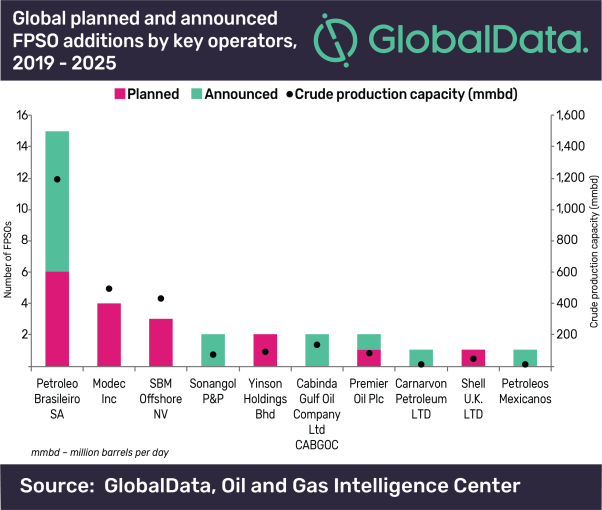 Rekha concludes: “SBM Offshore occupies the third position with the operatorship of three planned FPSOs by 2025. These FPSOs are expected to add a total crude oil production capacity of 0.5 mmbd during the forecast period.”

Crude oil production in Eagle Ford shale expected to decline by 10% during 2020–2021, says GlobalData
ConocoPhillips betting on recovery of crude oil demand with acquisition of Concho Resources
Feedstock optimization and prospect of netting steady revenues enabling integrated refineries
After drastic drop of US crude production in April and May, the system starts to balance
COVID-19 hampers oil and gas services industry business outlook