Plaque psoriasis population to reach over 16.8 million by 2030 in the 7MM influenced by obesity, type 2 diabetes and smoking, says GlobalData

13 Oct 2021
Plaque psoriasis population to reach over 16.8 million by 2030 in the 7MM influenced by obesity, type 2 diabetes and smoking, says GlobalData

The number of individuals with diagnosed plaque psoriasis in the seven major markets (7MM*) is projected to increase from around 15,720,000 in 2020 to over 16,850,000 in 2030, at an annual growth rate (AGR) of 0.72% according to GlobalData, a leading data and analytics company. These increases are likely to subsequently increase the size of these markets throughout the forecast period.

The company’s latest report, “Plaque Psoriasis – Epidemiology Forecast to 2030”, reveals that the prevalence of risk factors such as obesity, type 2 diabetes, and smoking may have an influence on case numbers with estimates that the US will have the highest number of lifetime diagnosed prevalent cases of plaque psoriasis across the 7MM in 2030, with over 8.1 million cases, while Japan will have the lowest, with about 0.47 million. In the **5EU, GlobalData estimates 8.2 million plaque psoriasis diagnoses in 2030.

Walter Gabriel, MPH, Epidemiologist at GlobalData, says: “The rising number of plaque psoriasis cases will be influenced by anticipated population changes over the next decade. For example, psoriasis’ higher incidence in older patients will mean that the number of cases in the US will rise from over 7.4 million cases in 2020 to over in 8.1 million cases as the population grows and the number of elderly increases – even though the proportion of people with the disease in the country will remain roughly the same.” 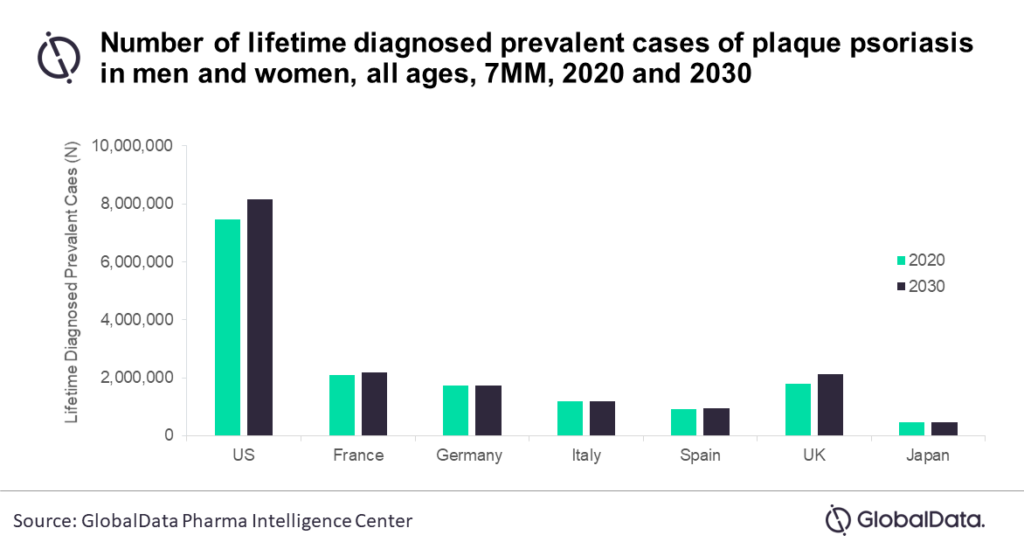 Treatments to alleviate the symptoms of plaque psoriasis are widely available, but which type of treatment is required depends on a mixture of symptom severity and a patient’s response to previous treatments. Not only that, but these severities and reactions can vary across countries. As a result, understanding the breakdown of the number of patients expected to have mild, moderate and severe psoriasis is critical to treating patients properly.

Gabriel adds: “GlobalData epidemiologists do not expect any significant changes that would alter the size of the plaque psoriasis population at this time.”