Unmanned Aerial Systems (UAS) were once limited to a few technologically advanced nations, but the growing consumerization and proliferation of such technologies means advanced capability is now in the hands of non-state actors, as seen by recent drone incursions at Gatwick, Heathrow and Newark airports. As key enabling technologies such as Artificial Intelligence progress, the prospect of UAS ‘swarm’ attacks, defined as multiple autonomous drones networked together, is also becoming a reality, says GlobalData, a leading data and analytics company.

GlobalData’s latest report ‘Counter-Unmanned Aerial System(UAS) Technologies – Key Drivers, Trends and New Developments’ reveals that, given such wide spread technological development and a high business interest amongst various OEMs; the C-UAS Active Defense Systems sector is anticipated to witness sustained growth. However, the market is far from mature and there are many types of technologies in development and operational use.

Daniel Jones, Head of Aerospace, Defence & Security at GlobalData comments, “C-UAS Active Defense Systems are in essence interdiction systems which disable or neutralize rogue UAS’s by means of mechanisms, such as RF Jamming which disrupts the radio frequency link between the UAS and its operator, GNSS Jamming which disrupts the UAS satellite link, Spoofing which takes over the UAS communications, Lasers, Nets and projectiles which physically restrain the UAS. Some interdiction systems use a combination of several of these elements in order to enhance the efficacy of the overall product.”

Standard military counters to aerial threats such as surface-to-air missiles have inherent limitations when dealing with small, fast moving drones. In particular, cost effectiveness. Lasers and rail gun based C-UAS active defense/interdiction systems are the most viable options from an operational cost perspective, as these are electrically powered and have relatively low costs for each shot, significantly so when compared to missiles. 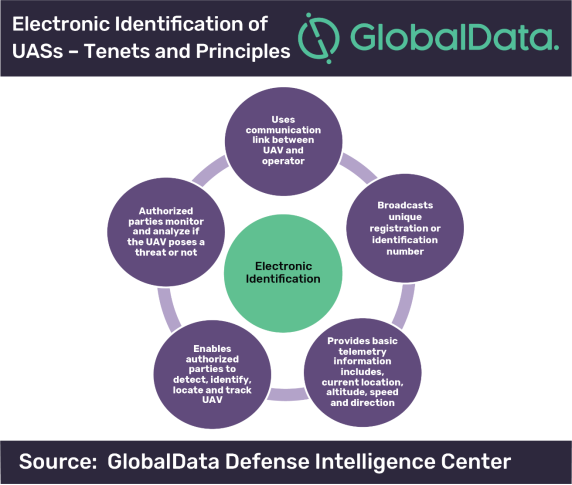 Other forms of Active Defense Systems are also cost effective means of disrupting a swarm or a single UAS by preventing coordination among individual elements, collapsing the swarm so that it disintegrates into many disparate, uncoordinated elements.

Research is also focusing on other techniques including electronic identification, allowing authorities to remotely access information such as the model type, operator name, exact location and registration number of UAVs operating in the protected airspace. This information could be used to establish whether a UAV presents a threat or not, which is currently difficult to ascertain.