Renewable energy, the only way forward to the global climate change mitigation and environmental requirements, is expected to comprise 50% of Chile’s power mix by 2030, according to GlobalData, a leading data and analytics company.

GlobalData’s latest report, ‘Chile Power Market Outlook to 2030, Update 2019 – Market Trends, Regulations, and Competitive Landscape’, reveals that the development of renewable energy is a high priority for Chile. In 2018, the share of non-hydro renewable power reached 19% of the power mix and is expected to exceed 50% of the power mix by 2030.

Chile is now a net exporter of electricity, signifying that the increasing share of renewables and gas based power in the electricity mix will make up for the capacity vacuum resulting from the decommissioning of certain coal capacity by 2030.

Piyali Das, Power Industry Analyst at GlobalData, commented: “Thermal power dominated Chile’s power mix in 2018 with a share of 52.7% of the total installed capacity, followed by hydro and renewable with a share of 28.1% and 19.1% respectively. In the renewable energy mix the major contributors are solar PV and wind with shares of 50.8% and 33.8% respectively in 2018.’’

Power consumption in Chile increased at a compound annual growth rate (CAGR) of 4.1% between 2010 and 2018 due to increased economic activity. 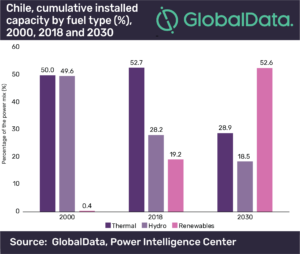 Chile recognized the need for energy storage as a key attribute to provide continuous, sustainable and reliable renewable power. As such, Chile is looking to energy storage technologies such as batteries, pumped hydro, molten salts and hydrogen as their immediate opportunity areas. The country has also implemented transmission expansion plans to incorporate ease in transmitting the renewable energy.

Das concludes, “Chile is a land of opportunities for renewable energy. The Energy 2050 Roadmap, large-scale energy storage solutions, grid modernization and the retirement of the fossil fuel plants are the crucial elements expected to drive Chile’s energy transition. The country is also extending their relations with US to strengthen the infrastructure investment and energy cooperation between the two countries, thus with flexible environmental approvals, several investors would consider investing in its power sector.”