Piyali Das, Power Industry Analyst at GlobalData, commented: “The country is aiming to boost the renewable energy sources through tender mechanism. Renewable power sources are expected to increase at a compound annual growth rate (CAGR) of 8.9% between 2019 and 2030 with a net capacity addition of around 50 gigawatt (GW). Installed capacity for onshore wind will double from its current levels of 15.1 GW by 2026, and to support the expansion the government has announced doubling of the renewable energy budget. Solar PV is not behind by much in terms of growth and will witness an addition of more than 24 GW during the same period.” 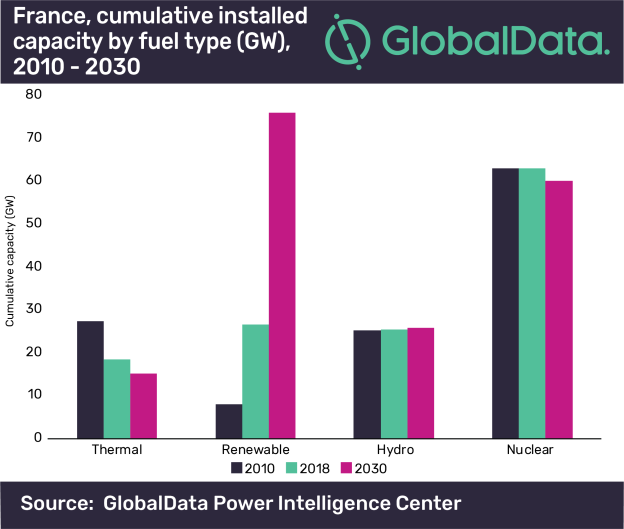 In the long-term the government has decided to cut down its fossil fuel dependency and is replacing coal and oil-fired plants with gas-based plants. The government also has plans to reduce the nuclear power generation to 50% of the net generation by 2035. The plan is to decommission around 14 nuclear reactors by 2035 and fill the gap with renewable energy sources.

Das concludes: “To date the development of renewable energy is largely supported by public support mechanisms. These mechanisms finance the difference between the remuneration of their production on the wholesale market and the purchasing price guaranteed by the state to the renewable producer.

“Production costs are expected to further decline as witnessed by the continuous fall in average prices for solar in recent tenders. The development of solar and wind generation will facilitate energy generation at a lower cost.”