The onshore wind sector in Germany has struggled throughout 2019, achieving only 792.40 megawatt (MW) of onshore wind installations. The lukewarm responses to wind auctions last year means that investors are going slow on project development until any change in local regulation is implemented, says GlobalData, a leading data and analytics company. 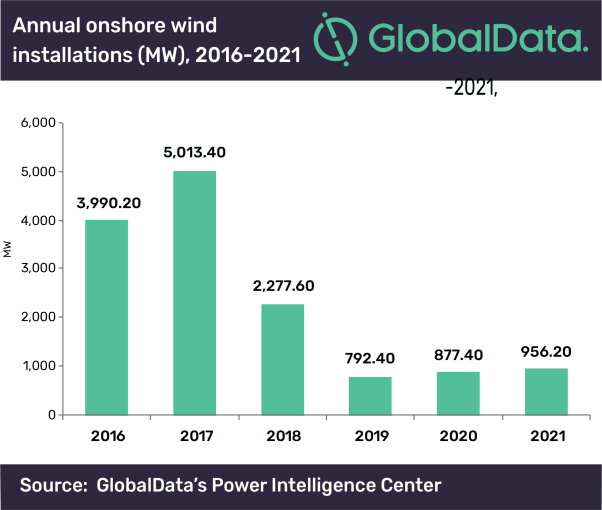 Following the switch to competitive auctions in 2017, Germany has witnessed a fall in its net annual installations. The flawed auction design and difficulties in obtaining licenses for turbine construction have discouraged investors, resulting in a lackluster performance of the auction mechanism.

Prasad added: “Construction of around 2,000 turbines with a combined capacity of 11GW is currently on hold on account of licensing issues. These issues mainly pertain to what mandatory minimum distance a project must be from residential areas and aviation infrastructure. The state of Bavaria, which has mandated that the distance between a wind turbine and the nearest housing must be ten times the height of the mast is not seeing any new wind power development. In the meanwhile, Brandenburg has passed a law that wind farm operators have to pay $11,100 per turbine each year to communities if a project is operating within three kilometers.

“With the last nuclear power plant in Germany to be shut down in 2022, and the coal power plants to be phased out by 2038, the country is aiming to get 65% of its power from wind, solar and other renewable energy sources by 2030.

“The onshore wind industry contributed around 25% to the power mix of country in 2018, which definitely has to increase if the country wants to be carbon neutral by 2050. This can be achieved by promoting wind and solar technologies.

“In order to achieve their climate target, Germany needs to add an average of 4.7GW of new onshore wind power capacity each year from now until 2050. This can be addressed by making amendments to the existing auction mechanism and project licensing for onshore wind projects.”