Solar photovoltaic (PV) and wind power have grown significantly in the US during 2010 to 2020, and are estimated to add significant capacities in the current decade – despite the IRS’s plans to phase out the Investment Tax Credit (ITC), and the uncertainty of Production Tax Credit (PTC) extensions, according to GlobalData, a leading data and analytics company. However, beyond 2025, offshore wind will steal the show to become a major part of the country’s power portfolio.

Harshavardhan Reddy Nagatham, Senior Power Analyst at GobalData comments: “The Investment Tax Credit (ITC) and the Production Tax Credit (PTC) have played a major role in the success of the solar PV and wind power markets in the country to date. Despite the IRS’s plans to phase out the ITC over the next few years, and end the PTC at the end of 2021, the two technologies are set to show consistent capacity additions. Solar PV is set to add an average of 19GW each year during 2021–2030, while onshore wind will add 6.7GW.”

A major milestone to the US’s power portfolio will be the first commercial offshore wind farm, set to be commissioned in 2023. Subsequently, 1GW to 2GW offshore capacity is set to be commissioned each year during 2024–2026, and 2GW to 4GW each year during 2027–2030. Beyond 2025, offshore wind power is set to add significant capacity and become a major part of the country’s power portfolio.

Nagatham comments: “Offshore wind is the dark horse of renewable technologies in the US expected to rise suddenly in the later part of the coming decade going from the smallest renewable power source to the third largest by 2030.” 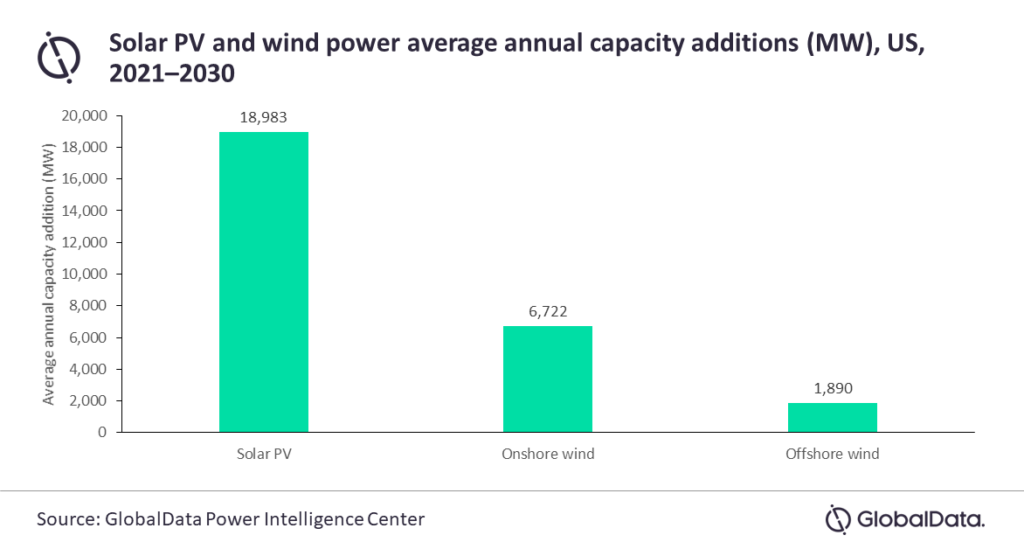 Coal power generation has been on the fall in the US since 2009 due to the discovery and expansion of the much more economic option: shale gas. Added to this, the Environmental Protection Agency’s (EPA) Cross-State Air Pollution Rule led to several coal-fired plants either shutting down, reducing generation or implementing expensive refurbishments to comply to the rule. Following this, solar PV took off as the mainstream generating source with an average of 4.7GW capacity added each year during 2011–2015, while onshore wind power was already a mature technology in the country.