An educated workforce with considerable disposable income is contributing to the growth of the meat sector in South Korea, which is expected to grow at a compound annual growth rate (CAGR) of 1.8% from KRW14,876.6bn (US$13.8bn) in 2018 to KRW16,248.2bn (US$15.3bn) in 2023, says GlobalData, a leading data and analytics company.

The company forecasts frozen meat category to register the fastest value CAGR of 2.6% during 2018–2023, followed by the processed chilled raw packaged meat category, which is expected to record a CAGR of 2.1%.

Mounika Gupta, Consumer Analyst at GlobalData, says: “Promising employment opportunities are forcing consumers to adopt a hectic lifestyle. These time-scarce consumers are in turn looking out for convenience in food options, ultimately driving the growth of packaged meat products.”

The per capita consumption (PCC) of meat in South Korea, which was higher than both APAC and global levels at 17kg in 2018, is forecast to increase to 17.8kg by 2023. 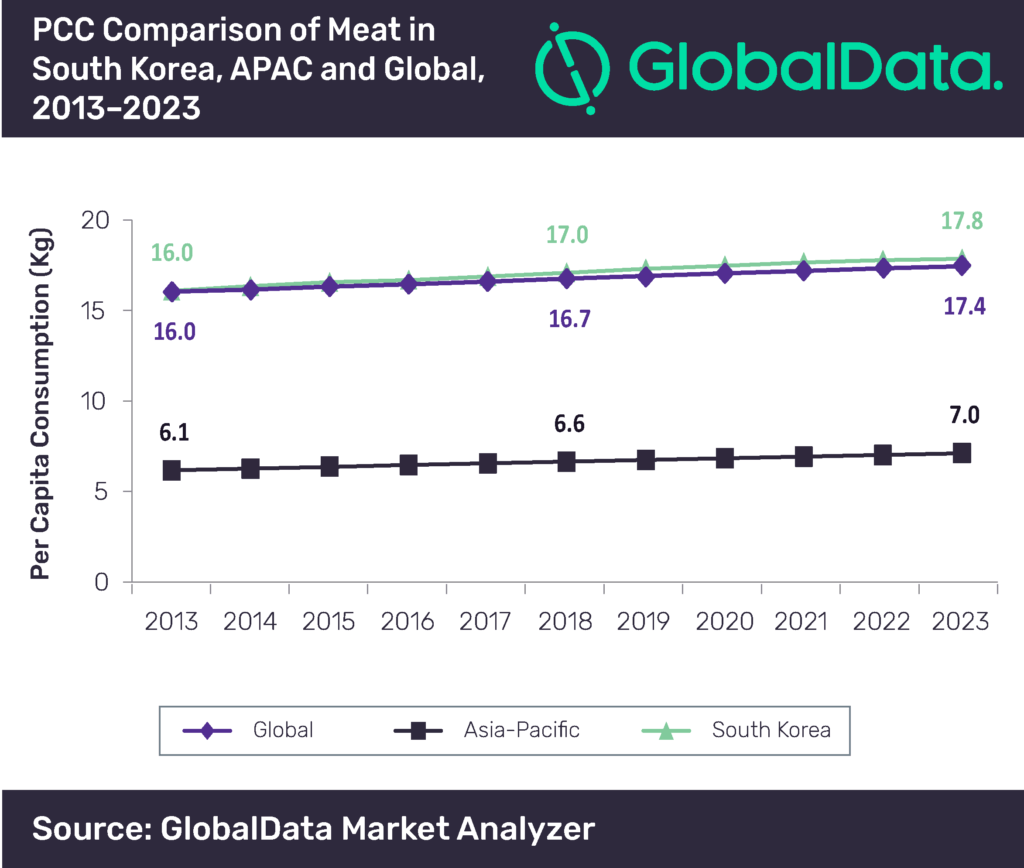 IMAGE FOR PUBLICATION: PCC Comparison of Meat in South Korea, APAC and Global, 2013-2023

However, the report reveals that South Korea’s value share in the APAC region, which stood at 4.8% in 2018, is expected to decline to 4.4% by 2023, mainly due to the projected faster growth of meat products among other leading countries in the region, such as Hong Kong and China.

Harim Corporation and Cj Group were the leading players in the South Korean meat sector while Harim, and Cj were the top brands in 2018. A well-developed distribution network of hypermarkets and supermarkets, and consumers’ positive perception have contributed towards the modest consumption of private label products, which accounted for an overall penetration level of 19.9% in 2018, according to GlobalData.

Greggs must adapt if it is to enter the arena amongst business heavyweights
Organic label under greater scrutiny, which may bring environmental impact controversies to light, says GlobalData
57% consumers in APAC highly ingredient-attentive with regards to food and beverages, says GlobalData
Farm-to-fork strategy helped Licious to raise revenues by over 300% in Indian meat industry, says GlobalData
China’s dairy and soy food market set to be worth US$56bn by 2023, says GlobalData