The aviation industry is in deep crisis as the COVID-19 pandemic forced airline companies to suspend all flights due to muted travel demand. Airline operators have been reporting consecutive quarterly losses since the first quarter (Q1) of 2020 and Southwest Airlines Co (Southwest) is not an exception. This led to a staggering 200% rise in influencer conversations on Twitter during May-October 2020 compared to the previous six months, reveals GlobalData, a leading data and analytics company.

To navigate the catastrophic disruption, Dallas-based Southwest is resorting to new tactics by focusing on leisure travelers and started expanding new domestic routes. 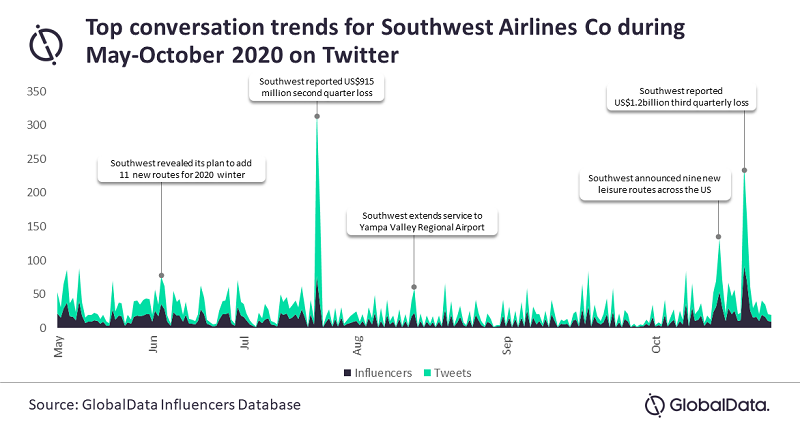 Smitarani Tripathy, Influencer Expert at GlobalData, comments: “In July, there was a dramatic rise in influencer conversations around Southwest on Influencer platform, led by the second quarterly loss report, following the first quarterly report. Similar to other airlines, Southwest also has been affected by the government-imposed travel restrictions, low demand of travel while maintaining social distance to prevent the spread of COVID-19 outbreak.

“Another major conversation spike among influencers was noticed in October, when Southwest suffered third consecutive quarterly loss for June-August 2020. However, the company managed to trim the daily cash burn to around US$12m in October from US$30m in April.”

Aurojyoti Bose, Lead Analyst at GlobalData, says: “With the appetite for travel remaining muted and pressure mounting on airline operators, several airlines have resorted to job cuts and hiring-freeze to manage costs. An analysis of GlobalData’s Job Analytics database reveals that Southwest has stopped hiring and it was way back in March 2020 when the company posted some jobs and it did not disclose any job postings ever since.”

Despite being crippled with loss, Southwest added new domestic destination routes in its network to capitalize on the potential travel demand after relaxation on air travel. A total of 11 new routes are planned out for Long Beach, Orange County, Atlanta, and Denver, starting November.

Ms Tripathy concludes: “The COVID-19 pandemic has forced airlines to shift focus from business travel to leisure travel. In October, another conversation spike was noticed when Southwest announced to add nine new routes across the country in 2021, including leisure destinations in Florida, Colorado and California.”