In GlobalData’s ranking, Sullivan & Cromwell secured the top position in terms of deal value by advising on five deals worth $26.5bn, which was the highest value among all the advisers. Meanwhile, White & Case led in volume terms having advised on 16 deals worth $21.8bn.

Aurojyoti Bose, Lead Analyst at GlobalData, comments: “Most of the top ten advisers by value showcased deal value higher than US$20bn and competition for the top position was intense. Sullivan & Cromwell advised on three billion-dollar deals worth greater than or equal to $1bn, out of which one was a megadeal worth greater than or equal to $10bn, which helped the firm top the list by value.

“While Sullivan & Cromwell did not appear among the top ten advisers by volume, White & Case, that led in terms of number of deals, also managed to occupy the fifth position by value.”

Kirkland & Ellis occupied the second position by value with 12 deals worth $25.7bn, followed by Cleary Gottlieb Steen & Hamilton with four deals worth $25bn and Freshfields Bruckhaus Deringer with seven deals worth $22.3bn. 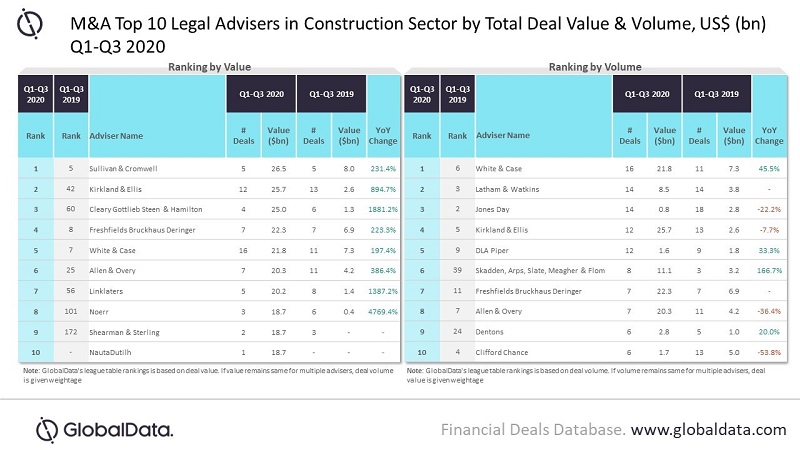