Microsoft and Sony have certainly taken note of the console shortage issue for the PlayStation 5 (PS5) and Xbox Series X, with mentions of ‘supply’ and ‘shortage’ grown by over 180% in both console manufacturers’ 2020* filings, which GlobalData, a leading data and analytics company, notes is a staggering change.

Rinaldo Pereira, Senior Business Fundamentals Analyst at GlobalData, says: “Mentions of ‘supply’ and ‘shortage’ grew from 72 in 2019 to 203 in 2020. The sudden rise in discussions show that the console manufacturers noticed the difficulties beforehand.

“Both companies termed the demand as ‘unprecedented’ and were expected to raise inventory by the end of 2020. However, Microsoft expects the shortage to continue until spring 2021. The launch of the next-gen consoles was expected to revive the console market’s growth immediately, yet that doesn’t seem to be the case in the short term.”

Rupantar Guha, Thematic Analyst at GlobalData, comments: “It is no surprise that the market is seeing console shortages. With a combination of strong pent-up demand, pandemic-triggered production and supply chain disruption, and the existence of scalpers in the market, there were a lot of hurdles to jump. Microsoft and Sony rushed to launch and meet promised timelines, rather than waiting for the supply chains to return to normal, and this is now leaving fans desperately trying to order and coming up empty handed.” 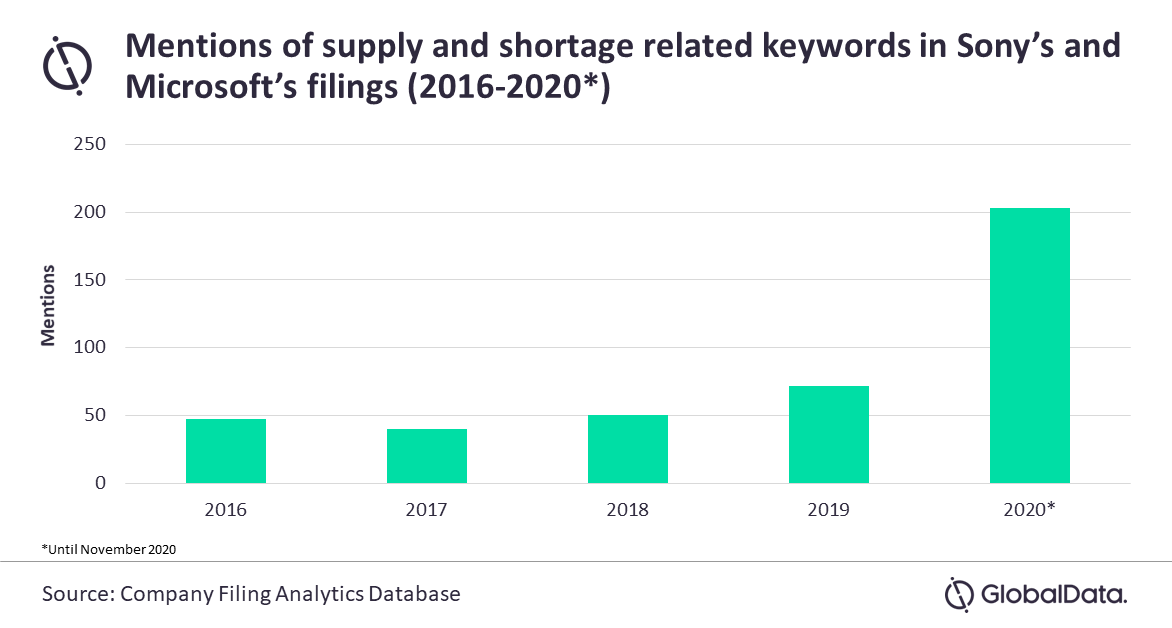 Pereira adds: “Currently, the demand for gaming consoles is extremely high due to the holiday season, and it is likely that Microsoft and Sony failed to capitalize due to lower inventories of consoles in Q4 2020.”

Guha adds: “Both Sony and Microsoft want to dominate the games console market, which will be worth $44bn in 2021, according to GlobalData. With the ongoing shortages, it is unclear if Sony will meet its target of shipping 8.2 million units of PS5s between the holiday season of 2020 and the end of the first quarter of 2021. Microsoft, which does not disclose shipment data for Xbox consoles, must aim to control the US market, before Sony resorts to its renowned price-slashing tactics.

“Microsoft ranks second in GlobalData’s thematic gaming sector scorecard, while Sony sits at five. The scorecard provides an outlook on a company’s competitive positioning in the top 10 themes that matter most to the sector. Microsoft’s higher ranking is attributable to stronger scores in themes like mobile gaming, social media, cloud gaming and COVID-19.”

Machine learning most mentioned trend among top 10 AI influencers on Twitter ranked by GlobalData during Q3 2020
Safety and social distancing norms will drive smart clothing adoption in APAC, says GlobalData
Microsoft benefiting from positive business sentiment towards cloud computing, says GlobalData
Huya and DouYu merger will strengthen Tencent’s control over Chinese gaming market, says GlobalData
Microsoft’s ransomware battle is just one skirmish in the cyber threat war in the run up to the US election