Globalization has transformed the economic frameworks of both developed and emerging nations. However, along with steady economic growth, several countries have also witnessed high rise in their debt burden, both private and public alike. Against this backdrop, GlobalData, a leading data and analytics company, cautions governments against relying too much on debt and calls for more transparent and regulated financial markets.

The substantial debt burden of the Chinese economy is a suitable example of this scenario. During 1995-2017, the Chinese economy grew by 586.9%, whereas the total debt burden of the country expanded from 107.9% of GDP in 1995 to 253.6% of GDP in 2017. Out of the total outstanding debt of the country, 81.5% is private debt, majorly corporate debt, while the rest is general government debt. Other emerging countries such as Kuwait, Russia, Chile and the UAE have a high percentage of private debt (above 80% of the total debt burden).

In advanced countries such as South Korea, Australia, the Netherlands, private debt contributed more than 80% of the total debt burden as of 2017. In majority of the advanced economies, the private sector has the largest amount of debt share (more than 50%) and is the strongest driving force behind the rise in global debt.

On the other side, the sovereign debt levels of many countries have risen to an alarming level in recent years, posing a serious threat to their economic prospect. Countries such as Taiwan, Greece, Italy and Japan have a public debt share of more than 50%. According to IMF, general government debt has ballooned in economies such as Japan (237.6%), Italy (131.8%), Greece (181.8%), Portugal (125.7%), and the US (105.2%). 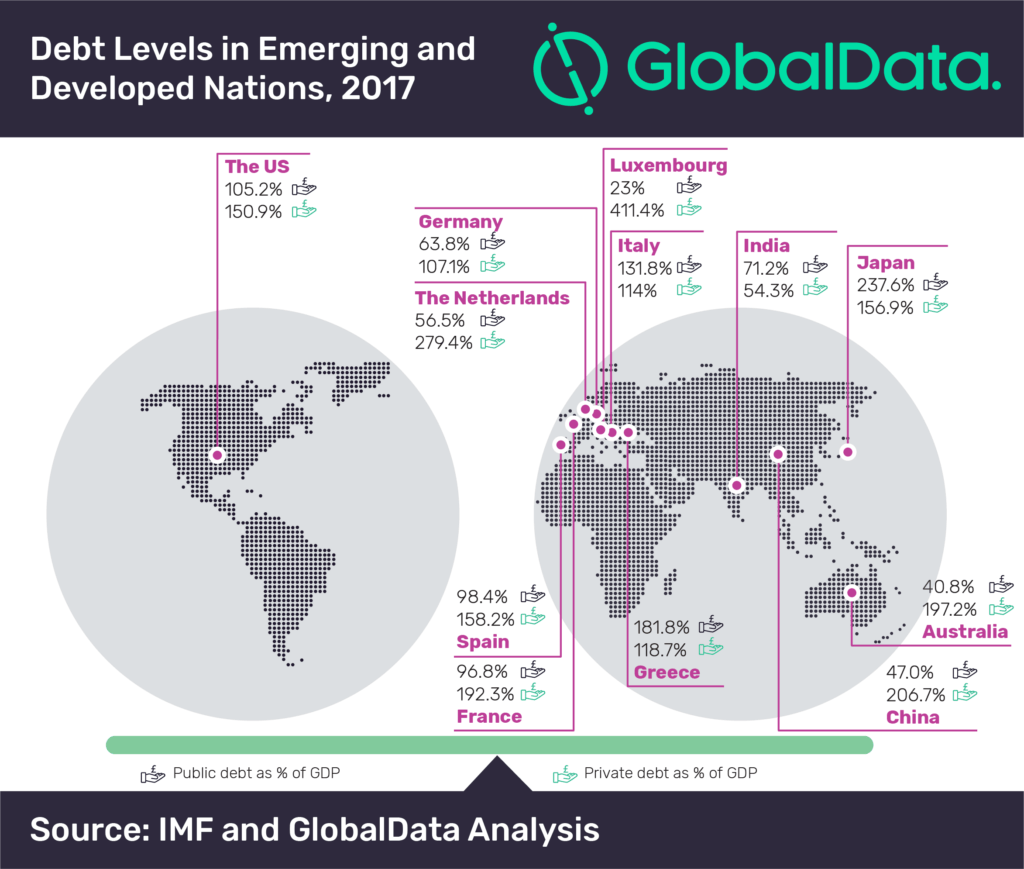 
Kausani Basak, Analyst for Economic Research at GlobalData stated: “The rising cost of debt servicing on exploding levels of public debt can force governments to reduce spending on priority areas such as infrastructure, health and education, and significantly impact their economic growth. Rising debt levels will lead to higher interest payments, adding to the levels of unproductive government expenditure. In addition, high levels of debt restrict governments from reducing the tax rates, which can become a roadblock to development.”
At the same time, the rising debt burden of the private sector will result in declining investor confidence. In an extreme case scenario of a corporate debt crisis along with high government debt, any assistance from the public sector will also be hard to come by.

The changing political landscapes due to geopolitical conflicts are adding to the debt burden of the corporates and public alike. In the US, President Trump announced massive tax cuts in combination with an increase in federal spending and consequently the US government ended up issuing more bonds into the debt market. The substantial decrease in tax revenue is expected to cost the US treasury up to US$1.9 trillion over the next decade (2018-2028), according to Congressional Budget Office, US.

The US-China trade war and Brexit have also created extreme uncertainty in the private sector. The slowdown in the activities of the private sector might hamper debt repayment capacity of the companies, which can be highly dangerous for the financial sector of a country.

Basak concludes: “As the threat of a possible debt crisis looms, the governments must implement forward looking policies that look beyond reducing the present debt burden. The policies should be geared towards creating well regulated financial markets. In addition, governments must aim to create enough fiscal space so as to be able to reduce their debt burden.”