SVoD subscriptions in North America to expand at 9% CAGR between 2019 and 2023, says GlobalData

North America’s video on demand (SVoD) market will close 2019 with an estimated 147 million SVoD subscriptions, expanding at a compound annual growth rate (CAGR) of 9% through 2023, according to GlobalData, a leading data and analytics company.

GlobalData’s latest report, ‘OTT Video Content, Pricing and Market Opportunity in the Americas’, reveals that the US market, which accounts for more than 90% of subscriptions in North America, is one of the most competitive SVoD markets worldwide. Over the last several years, the popularization of SVoD platforms has been driving cord-cutting trends in the traditional pay-TV space. These are set to accelerate over the coming years.

Eulalia Marín-Sorribes, Technology Analyst at GlobalData, comments: “Home to some of the leading SVoD platforms globally such as Netflix, Amazon Prime Video and HBO, the US SVoD market is highly competitive with internet companies, production houses and telecommunications companies vying for market share.” 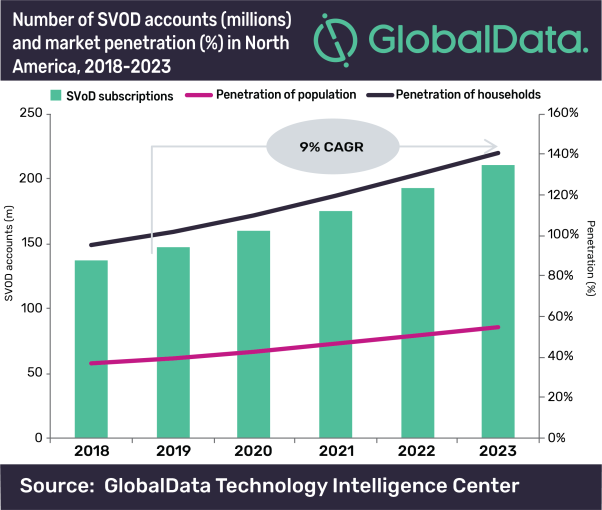 Marín-Sorribes continues: “The recent launch of new SVoD platforms Apple TV Plus and Disney Plus will heat up competition in the US market even further, increasing pressure not only on traditional pay-TV operators but also on incumbent SVoD platforms such as Netflix.

“Disney Plus will leverage Disney’s extensive content library, most likely locking key content up from competing SVoD platforms. Apple TV Plus has already announced the release of a wide selection of original premium content, with plans to release new titles in the coming months. In addition, HBO has announced that it is readying the launch of a new SVoD platform under the HBO Max brand in 2020, taking advantage of Warner Media’s extensive content assets”.