Driven by an aging population and more people with comorbid conditions, the amount of patients diagnosed with T-cell lymphoma (TCL) is expected to increase at an annual growth rate (AGR) of 3.00% from around 27,000 cases in 2020 to 35,000 cases in 2030 in the eight major markets (8MM*), according to GlobalData. The leading data and analytics company notes that the increase is partly attributed to the moderately rising trend in incidence in the 8MM, combined with underlying demographic changes in the respective markets.

TCLs are a rare type of cancer that form in T-cells and are either indolent (slow-growing) or aggressive. TCL either develops in lymphoid tissues such as the lymph nodes and spleen, or in other organs (gastrointestinal tract, liver, nasal cavity, and skin).

According to GlobalData’s latest report, ‘T-Cell Lymphoma: Epidemiology Forecast to 2030’, there will be an increasing trend of diagnosed incident cases of TCL in all 8MM in the next 10 years, driven primarily by the increase in incidence and growing aging population, as well as individuals with more comorbid conditions that worsen susceptibility. 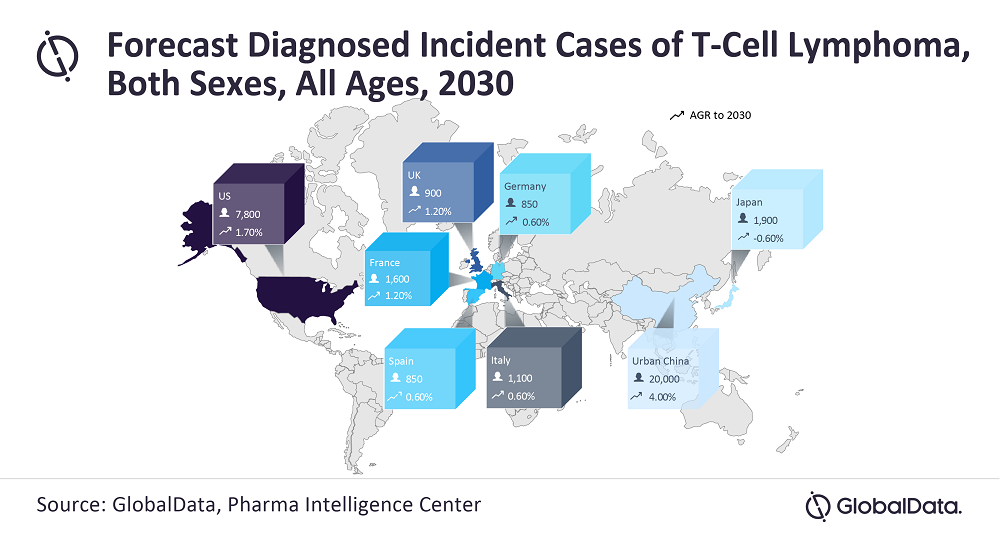 Bishal Bhandari, Senior Epidemiologist at GlobalData, comments: “It is worrying that so many patients with PTCL were diagnosed in the unfavorable stage, as these patients require aggressive therapy to get the cancer under control. As such, there is a need for diagnostic tools to detect PTCL at earlier stages, and treatment priorities should also be aligned to address this aggressive form of cancer.”

The five-year diagnosed prevalent cases of TCL are also expected to increase in 2030 from the current level in 2020.

Bhandari adds: “The aging and increasing population, moderately rising trend in the incidence in the 8MM and improved survival if diagnosed in early stages, suggests that the overall number of people with TCL will continue to increase during the forecast period.”

*8MM: The US, France, Germany, Italy, Spain, the UK, Japan, and urban China